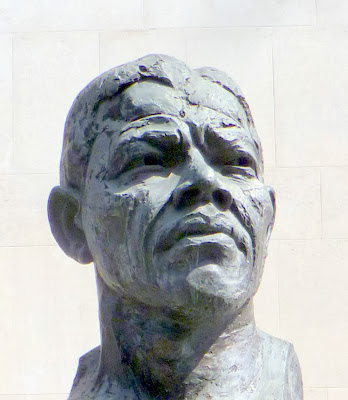 On Thursday evening during the formal LAPFF Forum diner I looked down at my Blackberry and realised that former political prisoner and President of South Africa, Nelson Mandela, had died aged 95.

The next morning Cllr Peter Brayshaw from the London Borough of Camden addressed the Forum and made a formal tribute to Mandela. Peter is vice chair of Action for South Africa which is the successor organisation of the Anti-Apartheid Movement (AAM).

Peter made a short but wonderful speech about Mandela and his essential role in bringing freedom to South Africa. He reminded us that UK local authorities had played an important part in helping to bring about the end of apartheid.

I will post again on Mandela. This powerful bronze statute of him (above) is on the South Bank in London next to the Royal Festival Hall.  Go and have a look if you can.
Posted by John Gray at Sunday, December 08, 2013