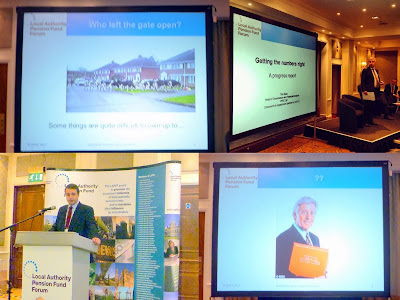 This presentation was one of the most important and the first of a few LAPFF reports on how those who are suppose to be protecting us in financial services are letting us badly down (or even much, much worse)

Tim Bush from PIRC spoke first on "Getting the numbers right - a progress report".  This is an update on this LAPFF report
"UK and Irish Bank Capital Losses - Post Mortem"

Tim described how his fellow speaker, Iain Richards (bottom left) had originally wrote a paper "Bringing Audit Back from the Brink" in 2004 and how he was attacked and smeared by the Audit "profession" over it.

It is now pretty clear that the Banking Crisis was caused at least in part to the failure of the standard setters in the accounting profession. These standard setters "lost the plot" and the Financial Standards Agency (FSA) went along with it. There was since a "cover up". Rather than admit that the numbers were wrong they choose to "complicate, distract and confuse".

Banking losses are even now not fully disclosed. The Bank of England agreed (Nov 2012) that the undeclared losses in UK Banks are nearer to the £50 billion that PIRC originally estimated. Our investor coalition went to QC George Bompass for legal advice. He said that UK Company Law prevails over accounting profession standards.

This is vitally important since the audit profession makes the crazy, ludicrous claim that the accounts they "passed" of Banks that were now clearly insolvent, conformed to their standards at the time (if not the law). - so that is alright then?

What this investor coalition want is audit standards that are "true and fair value", prudent and maintain capital.

Iain spoke about how the European Union seem likely to insist on the retendering of company auditors after 10 years and the mandatory rotation after 20 years. This is not ideal but it at least establishes some important principles and is a tangible change at last.

But the real issue is the "diabolical audits". The banking collapse was entirely predictable. Auditors acted within flawed industry standards and not the statutory law. "All that matters is we comply with standards".  This is a great game of musical chairs and word play. We must get auditors to adhere to the legal framework.

My question to the panel is that without being too conspiratorial how much are such "conflicts" in company audits driven by the cross selling of services by audit partners e.g, investment advice.

The EU had suggested originally that firms should be only auditors but due to to massive opposition and lobbying this was dropped. In Germany this happens and the auditors are genuinely respected, do a good job and also make money.

A very interesting comment by David Pitt-Watson that he use to work for a large accounting firm and that there are still good, honest people in these firms who want to do the right thing.

It was suggested that this is very true and that Tim and Iain get a lot of secret help and support from individuals in these firms however the governance of these firms over international standards is at least as bad as the discredited football regulator FIFA. If not worse.

I personally don't follow or to be honest, give a toss about football, but I do care about my pension scheme members, who trusted and paid large amounts of money to those so called "professionals" to audit the accounts of the companies their funds were investing into - it is now clear that we were all just being scammed and ripped off.

Unbelievably they want nothing really to change and still want to rip off pensioners, orphans and widows in the future.
Posted by John Gray at Friday, December 06, 2013