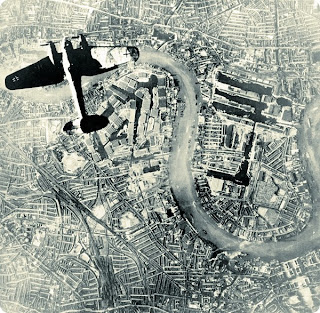 Labour Ipswich Councillor, Alasdair Ross, who spent over 24 years in the Royal Green Jackets, serving his country in Northern Ireland, Bosnia,  Kosovo and finally in with The Rifles in Sangin, Afghanistan warns us here about the nasty fascist so called "Britain First" front. Who are tricking the public to support them and using photographs of dead British servicemen funerals to raise funds.

I agree with Alasdair that these people are just fascists who shame our country and our war dead. Both my grandfathers fought in the Second World War. We lost hundreds of thousands of British military and civilians in combat and in the Blitz while fighting against the Nazi and their ilk.

"Britain First" is one of the many splits that have resulted from the welcome demise of the racist BNP. They are an extremist "hate group"- nothing more and nothing less.

(picture of German Bomber flying over the Isle of Dogs)
Posted by John Gray at Thursday, December 19, 2013