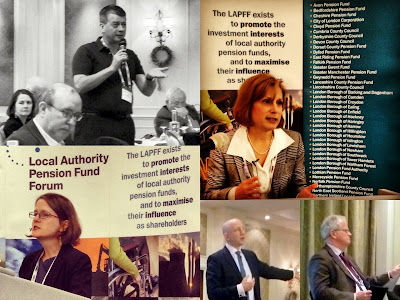 "Investor collaboration" is a bit of a buzz word in pensions lately. Nearly everyone seems to think it's "a good thing" although there is less agreement on the best way to bring it about.

First speaker was Daniel Godfry, CEO of the Investment Management Association. As recommended in the Kay review they have set up a "Collective engagement working group". They want to tackle the lack of long term thinking.

Complete the circle between asset owners, asset managers and the companies themselves. The real objective for pension savers is not what happens in12 months but size of pot when they retire in 20 or 30 years. Long term sustainable investment should be a competitive advantage.

Janet Williamson from the TUC (and "Trade Union Share Owners") spoke about the increased interest by trade unions in shareholder activity (see full account of TUSO here at last months TUC Pension Network Conference). They aim to use trade union staff pensions funds to collaboratively support union values and speak with one voice, share costs and punch above their weight.  They also want to work with other like minded investors.

Next was Richard Nunn of United Reform Church and the Church Investment Group (CIG) which was set by by the Church of England and Methodist Church in 2010.   An early battle was with one of their major fund managers who didn't want to vote in accordance to their wishes in company elections with "pooled" investment funds.  They just made excuses why this couldn't be done even though many other managers did so.  They had to be embarrassed into doing the right thing. They now have 6 members and will soon have real time data and will be able to see what is being done on our behalf.

Final speaker was Amy Borrus, deputy director, of the US Council of Institutional Investors (CII).  Amy said that the UK leads the governance world. There are now 120 public, private and endowment funds in the CII.  50% are public sector pension funds. They concentrate on two main things - long term horizons and index investment. This drives their interest in governance. In 1980s they tried to deal with takeovers; in 1990s boardroom behaviour and oversight; 2000s expanded to financial regulatory reform as Encom and Worldcom proved to be massive corporate frauds. The financial crisis of 2007 was a failure of corporate governance.  The big public funds team up with activist managers. Annual elections for directors and transparent pay votes are very important.

Despite progress investors still have a long way to go. You still get in US "zombie directors" of companies despite not getting majority support of shareholders. You should have "one share, one vote" and the right to vote in proportion of shares you hold. An increasing number of new "Start up" companies have duel or even triple shares with different voting rights.

My question to panel was that this conference had heard in the last 2 days plenty of things that suggest something is rotten in the investment world and that can LAPFF on a voluntary basis look into joining like minded organisation such as TUSC or CIG for collaborative voting? This went down well with Janet and Richard. The chair of panel (and LAPFF) Cllr Kieran Quinn said that LAPFF would consider it as they would any proposal from a member.

most of pictures in collage @LAPFForum twitter
Posted by John Gray at Tuesday, December 10, 2013