Trustees are still in the dark over ethical investing 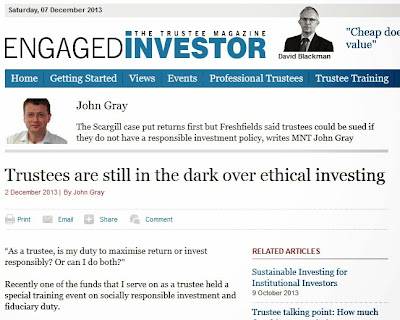 From Engaged Investor 2 December 2013 "As a trustee, is my duty to maximise return or invest responsibly? Or can I do both?”

Recently one of the funds that I serve on as a trustee held a special training event on socially responsible investment and fiduciary duty.

Our scheme advisers and external experts made presentations, followed by wide-ranging Q&A sessions. It was a fascinating experience and I feel that all pension trustee boards should consider holding similar events.


The basic principles of trust law are loyalty, prudence and impartiality, in order to act in the best interests of beneficiaries

The charity ShareAction gave us a presentation based upon their recent paper The Enlightened Shareholder, which for the first time made me feel confident that I really understood the conflicts that many trustees feel about this topic. The basic principles of trust law are loyalty, prudence and impartiality, in order to act in the best interests of beneficiaries.

Rightly or wrongly, there is no trustee duty to maximise returns.

Trustees have been given considerable discretion as to how to act in these ‘best interests’, subject to the core legal principles and acting within their statutory duties. If trustees also act on professional advice then it is unlikely that their decisions can be challenged, since courts are loath to second guess trustees.

The infamous Scargill v Cowan case was a pretty unusual set of circumstances. Miners’ leader Arthur Scargill wanted the pension scheme to exclude all overseas investments and all investments competing with coal. He was found to be putting the interests of the union first and not acting in the ‘best interests’ of all the beneficiaries.

The judge did, however, make the specific point in his judgement that he was not saying that only the financial interest of the beneficiaries could be considered.


A report by law firm Freshfields made it clear that, not only was it permissible for funds to have a responsible investment policy, it was arguably their fiduciary duty to do so

A report by law firm Freshfields in 2005 made it clear that, not only was it permissible for funds to have a responsible investment policy, it was arguably their fiduciary duty to do so, and trustees could be sued if they did not have one.

Finally and most importantly, not being obliged as a trustee to maximise return does not mean that you are uninterested in financial consequences, but it does gives trustees the confidence to challenge their managers and advisers on non-financial issues that are of concern to beneficiaries.

It also should give trustees the confidence to consider and take advice on the negative financial consequences of investing in companies that may be irresponsible.

And how much money has your fund lost in disastrous mergers and acquisitions?

There is also the belief, which is beginning to be backed by empirical research, that in the long term companies that act responsibly and do not, for example, destroy the environment or employ child labour ultimately produce genuine superior returns for all beneficiaries.

This is surely in everyone’s best interests.