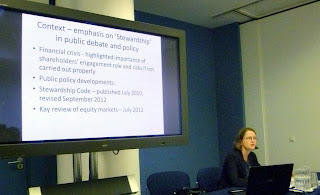 She started by saying the one "good" thing to come from the financial crisis is the recognition that shareholders were not engaged beforehand and may have even made the crisis worse.

The Stewardship code was first issued in July 2010 and revised in 2011. The Kay Review into similar issues took place in 2012. There has been an increase interest by unions in shareholder activity and the concept of "workers capital". UNISON started its capital stewardship programme in 2007. There was also a number of high profile union campaigns on private equity.This included Unite shareholder resolutions at the Tesco AGM in 2009 and by UNISON on Tar Sands.

There was a realisation that there was a gap between union values & their fund manager voting records and that there needs to be collaboration on voting and engagement by union staff pension funds.

This led to the formation of "Trade Union Share Owners" (TUSO) in March 2013 to constructively use the £1 billion plus of assets in trade union staff pension funds.

TUSO has a clear policy on executive pay and will vote against any package that means a maximum of top & average employee pay in excess of 20:1.  As well as being against any other increases that are not offered to all workers in that company. TUSO guidelines also ask that all board appointments should be publicly advertised.

Each of the trade union funds have an equal vote and voice. So far they have worked well on a consensus basis. Each fund has an opt out. It is also not about stock selection or disinvestment.

TUSO next steps are to grow beyond founders UNISON, UNITE and the TUC to include all union funds. There is a cost for taking part and a £6k maximum fee and then a sliding scale according to size of fund.

In the Q&A I asked any trade union trustees present to contact their union to encourage them to participate in TUSO and that not only should we be working collectively with other unions staff funds but surely in the UK, unions should be providing pension schemes to members as they do in Australia and elsewhere!
Posted by John Gray at Tuesday, December 03, 2013