3 Million People Struggle to Feed & Clothe their Children in UK: Official (& What to do about it) 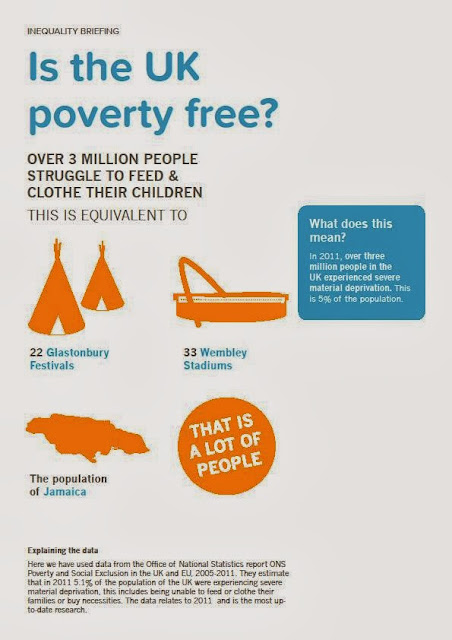 This is the post I was going to publish on Boxing Day but thought that by doing so I would be a bit of a Christmas misery. Instead I posted this.

In the run up to Christmas, the information and campaigning Group InequalityBriefing.org produced the above report on the 3 million people in this country who live in poverty (or "severe material deprivation" as defined by the ONS). This affects at least 5% of our population.

Next they published a briefing that showed the richest 1% in our society have got richer. In 1978 the top 1% got 6% of national income while in 2009 (latest figures - note under a Labour government) they got 14%!

Finally, on 20 December they published a report called "Can you live on a minimum wage?". They used figures from my Borough Newham (which is one of least expensive places to live in London) which shows if you survive on a minimum wage you would have £4 per week after paying for your essential living expenses. Of course people can't live on that and either work all the hours they can,  have 2 or 3 jobs, use food banks or depend on loan sharks (legal or otherwise).

I spent Christmas in North Wales and visited members of my family who do really difficult jobs and are bringing up kids on a minimum wage and insecure employment contracts. Life is really tough for them.

So what is the answer to widespread poverty and inequality in Britain?

The answer in my view (apology for rant) has got to include:-

Regardless of the rights and wrongs of each particular policy above, unless there is change then I am convinced that the long term future of this country as a free (but imperfect) stable Parliamentary democracy subject to the rule of law is at risk.

If the rich keep getting richer and the poor keep getting poorer then you don't have to have a degree in history to know what will eventually happen. The Labour Party needs to resume its historic mission to act and save capitalism from itself.
Posted by John Gray at Saturday, December 28, 2013