Ken Biking and Cycing in London 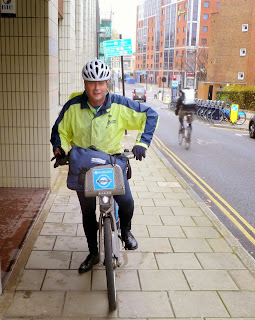 Off message. I started cycling in London again in May this year after a gap of many years. I use "Ken Bikes", also known as Barclays Cycle Hire or even dare I say, "Boris bikes"! The current London Mayor, Boris Johnson has unfairly been given the credit for hire bikes in London from former Labour Mayor, Ken Livingstone, whose idea it was in the first place.

There are no Ken Bikes currently in Newham so I usually take the train to Mile End or Liverpool Street station and pick up a bike there then cycle/bus/tube to work.

There are a number of sign posted "quiet" routes, missing most of the busy central London Streets. My favourite route into and back from North London is along the Regent Canal from Mile End or Bow. When I am feeling particularly fit I also jog back home to Forest Gate.

It costs £2 per day (£10 for 7 days or £90 for the year) to hire a Ken Bike for as many times as you want in a 24 hour period. If you go over 30 minutes it costs an extra £1 up to an hour thereafter the charges increases quite sharply. You can always stop after 29 minutes. Wait 5 minutes then continue for no extra charge.

There has been a series of cycling deaths in London in recent weeks which has put some people off cycling but the statistics suggest that it is safe even if sometimes things can be a little hairy.

There was been a crack down by police on cyclists and motorists and on Friday I was stopped by a PCSO and given a leaflet and reminded not to crash a red light. It is a little frustrating to stop at red lights sometimes as a cyclist, when there appears to be no one else about but the most scarey moments I have had so far have been have been with other cyclists not stopping at lights and nearly hitting me at speed.

I think if you are cycling for fitness you should treat the stop/start of traffic lights as being a free and beneficial form of interval training.

I always (ish) wear a safety helmet and bright clothing. I also don't wear headphones. One amazing (but perhaps co-incidental) benefit of cycling is that for a number of years I have suffered from a painful intermittent achilles tender problem in my left foot. I have been to physio, been given ultrasound, bought a wobble board and even been prescribed a leg brace - with little improvement but soon after I started cycling - it cleared up (touch wood).

If you commute on a Ken Bike it is difficult if you do not have storage space at your work place to change clothing or have no shower facilities but it is surprising how effective wet wipes can be (so I say anyway) and if you use the old Navy trick of rolling ironed folded clothing, it is amazing how they can come out of a bag or rucksack without major creases.

Hopefully with the colder weather I won't wimp out. Watch this space.
Posted by John Gray at Wednesday, December 04, 2013