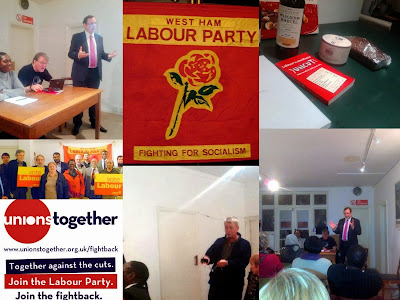 I was late due and missed the main part of his speech supporting the proposed reforms of the trade union link. He finished by stressing he wants not to break but to "mend the link".There was then a lively Q&A.

Daniel Blaney, an Unite delegate thought that the arguments for reform are inconsistent. What happened to "Refounding Labour" and why was this proposal not discussed then?

My question was that if the Party followed the UNISON model only about 1/3 members pay the Labour Party political levy and if the other unions reduced their affiliations by 2/3rd we are going to be broke.   The Tories are going to outspend us as usual and we will need every penny we can get to defeat them in 2015.

Phil said that this will take at least 5 years to implement and and that there will be no reduction in levy income until after 2015 General election.

I also said that a pilot London wide primary to pick the next Labour candidate for London Mayor is too risky and there is a real danger that we would have a candidate selected by the Evening Standard. We should experiment first with a CLP. One member suggested to widespread merriment that we should instead experiment with the a primary for the Newham Mayoral election next year!

Phil reminded us saying Labour is a movement not a monument. Things have changed. When he grew up there was 100k coal miners and people automatically voted Labour.

Gill Hay, an UNISON member supported the reform because she thought it will encourage trade union members to consciously and positively join the Party. Alan Griffiths, also from UNISON thinks unions are already incredibly weak and can do more.

Phil finished by stressing, once again, that to him this is all about strengthen the union link with the Party.
Posted by John Gray at Sunday, December 22, 2013