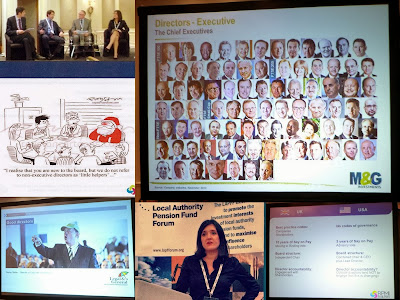 This fund is huge and manages passively over 4% of the FTSE All share index. Since the fund does not pick or choose companies to invest into then the only added value it can achieve is to try and make sure that the directors it helps appoint are up to the job.

Sacha said they are looking for personal values such as independence, delegating and managerial skills - but leadership is the most important attribute. The directors have to show succession planning, diversity of thinking and be seeking sustainable returns.

While L&G will use its voting power to challenge poor structures and directors, they believe that engagement works best.

Next was Tom Dobell from the famous M&G Recovery Fund. They currently have 90 active holdings which they hold on average for 8 years. Its all about the "People", "Strategy" and "Cashflow" and often the best way to find out about a director is to have a cup of tea with them.

They don't invest if there is financial and operational problems and don't change their views even when they are out of favour in the market (such as now).

15 years ago governance was box ticking exercise for many manager but they have always voted. He admitted that they have a way to go with diversity since only 3 out of the 90 Chief Executives (see picture of them above) are female. I think I could count a similar number of black CEO?

What the most important thing about an effective director? Trust.

Deborah Gilshan from the large railway industry pension fund Railpen was last speaker. The major role of directors is to effectively hold the Executive to account on our behalf.  Robust oversight of management and ensure diversity of insights, skills and experiences.

Despite weaknesses the UK has far better governance than in the USA. While there is positive news some US managers ignore shareholders and reward themselves excessive compensation.  The question that has to be asked is in whose interest are they acting?

In the Q&A I noted that there was a degree of consensus from all speakers that "diversity" was important for directors yet I am trusted as an employee trustee on a £900 million pension scheme but in UK employers do not think that they should have any employee directors? In 19 other countries in Europe they have employee directors including arguably more successful economies than ours such as Germany. Don't you think that in the UK we are missing out on such diversity?

Sacha and Tom answered by stressing the importance of companies consulting and talking with their staff and making sure that they share in the success of the company fairly. Which wasn't my question. Deborah was the only one to indicate that this was something to reflect on further.
Posted by John Gray at Sunday, December 08, 2013