Newham Compass: "How could the House of Commons work better?" 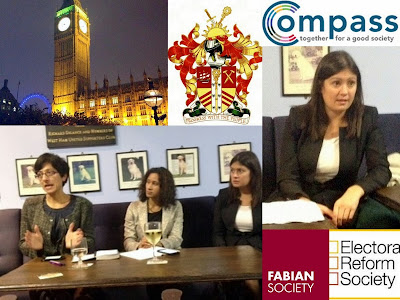 (Guest post by Sue Masters on last weeks debate) "If the House Of Commons is a megaphone to broadcast the opinions of those who don’t have a voice – one brilliant metaphor to spring out of our night’s debate – it’s an instrument whose booming tones too often can falter – drowned out by the herd, detuned by the strains of adversarial politics and muffled by party whips.

These were just a number of the problems expounded on by tonight’s speakers at Newham Compass’ debate.

Chaired by South East MEP candidate and local councillor, Farah Nazeer, The night’s conversation ranged widely and soon revealed there was no shortage of areas ripe for improvement.

The Electoral Society’s CEO, Katie Ghose kicked off proceedings with the radical notion that to truly alter perceptions of the House Of Commons you’d need to tear it down and rebuild from scratch, as the institution’s problems are embedded in its very architecture.

She also talked about the need to reconnect politics with the people, reform the Lords and truly think about what it is we want from our MPS – whether they’re there to represent us, scrutinise the executive, develop legislation or handle local casework. For her, though, there were glimmers of hope in terms of the increased impact of select committees, improvement in terms of their selection and emergency questions as a means to bring a wider array of voices to bear on proceedings.

If Katie took the strategic approach to the night’s question, it was left to Lisa Nandy (as MP for Wigan, a resident of the house in question) to give us the bird’s eye view of the day-to-day challenges facing her in the Commons – issues that were seldom black and white.

If she agreed with the needs for Lords reform she equally conceded the high quality of debate provided by that institution and felt the frustratingly adversarial nature of sessions such as Prime Minister’s questions, were counterbalanced by opportunities to work together, cross-bench, on legislation to ensure all angles and opinions were considered.

We heard about the limitations of MPs’ resources when squaring up to private sector lobbyists and when juggling many different areas of legislation across their working days. And then there was the strain push-button protest platforms such as Avaaz and 38 degrees have put on a member’s working day. While we’d all agree the preservation of our forests is a worthy (and seemingly uncontentious issue) how quickly would we hit that “send” button to register our support if we knew a vote, taking less than a minutes on our part could force an MP to spend hours dealing with correspondence, leading them away from assisting elderly constituents unable to afford heating bills?

If the issues raised by our two brilliant speakers covered a wide range of areas, this was more than matched by the ensuing Q&A, in which an audience of local councillors, candidates and residents raised their own concerns.

Perhaps the real issue of the night, however, was how such questions would ever receive proper airtime in the very house under consideration - though it was felt that questions about self-governance raised by the Scottish question and the prospect of a new government in 2015 offered a few rays of hope".
Posted by John Gray at Tuesday, December 17, 2013