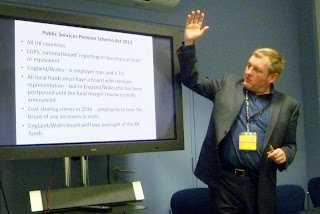 This workshop was led by Colin Meech, the notoriously shy and retiring UNISON National officer for Capital Stewardship. UNISON has by far the highest number of members in the £150 billion Local Government Pension Scheme (LGPS).

The LGPS is undertaking fundamental reform next year. Not only is it changing to a career average from a final salary scheme but the accountability of the LGPS is changing radically and for the first time beneficiaries will make up 50% of the new Pension Boards. Who arguably will jointly run the the LGPS with employers in the future.

The government is also consulting on merging the 89 different LGPS funds in England. Which drew the first question to Colin from someone in the workshop who has a private sector pension background and asked "Why do you have 89 different pension funds for one set of standards?" Which of course was music to Colin's ears.

Colin started with an introduction on the history of the LGPS. It can trace it roots to pensions for Council "Poor Law" officials in the 19th Century.  In 1922  NALGO a predecessor union of UNISON was formed to help set up the LGPS.

At the moment there is a new Shadow National Pension advisory board with 6 employer representatives and 6 Union.  There are 4.5 million members of the LGPS and 1.3 active. Most schemes have delayed auto-enrolment until 2017 (not my Tower Hamlets)  The smallest scheme is the Isle of Wright at £300m while the largest Metropolitan Schemes are worth £10-12 billion each.  There are 79 LGPS run by local authority committees while 8 are run by by senior Council managers officers called Section 151 officers who run their schemes themselves.

The LGPS is subject to the Superannuation Act 1972 and Local Government Act 1972.  As well as local authorities there are 6700 private employers in the LGPS. A 1/3rd of members are now in the private sector.

89% of LGPS asserts are currently managed by 785 external fund managers. 5 of whom manage £64 billion between them.

Colin finished the session by asking the workshop to suggest how the LGPS should be governed in the future. There was a stunned silence to his proposal. I said to Colin that this is because we were use to be told what to think by you not to be asked our opinions!