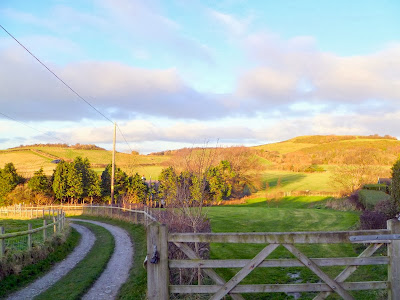 Sort of off message but I spent Christmas visiting family and stayed in the ancient North Wales village of Gwaenysgor on top of the steep hill over looking the coastal resort of Prestatyn.  The village is part of the Clwydian range area of outstanding natural beauty. The history of the village actually predates the Norman Domesday book of 1086 with evidence of Neolithic, Bronze and Iron age settlements as well as Romans and Anglo-Saxons.

I stayed in this converted 18th century cottage which the  owners believe was built for local stone quarriers.  There was a number of local history booklets inside and since I was stuck down for most of the week with man flu I was able to read up on the area and take occasional walks in the beautiful countryside and take in the fantastic views.

Yet life in the village in the past must have been very hard.The local village economy depended not only on subsistence farming but also lead and coal mining. Mains water from communal standpipes only arrived in 1932. The first street light was only in 1959 and mains sewage in 1967. Families suffered from Diphtheria, Smallpox and Scarlett fever epidemics.

There were no known Castles or battle sites but there was the "Tithe Wars" of the 19th century.  The mostly non conformist majority in the village resented having to pay a tithe to support the Anglican Church. In 1889 a bailiff sent to size assets for non-payment had to be rescued by Police from a local farm and was then stoned by angry villagers. There was also "School Board" wars in the village between the Anglican school and the non-conformists school. In 1906 tensions grew that the local rector was accused of physically attacking children going to the non-conformist school with his umbrella and acting like a "wild beast"!

My final bit of Labour movement history is about a famous son of Gwaenysgor - Welsh speaking
Labour MP Gordon MacDonald who was born in the village and later become a coal miner, union official, MP and eventually a Baron (and last Imperial Governor of Newfoundland).

It was a very quiet and peaceful stay. I recommend the Eagle and Child Inn for great pub grub.