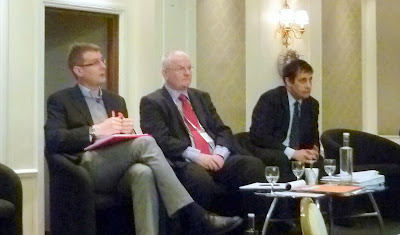 This debate was with Martin Hickman (left) who use to be a journalist with the Independent and wrote a book on hacking with Tom Watson MP and with Evan Davies from "Hacked off". Cllr Kieran Quinn chaired.

Somewhat ironically but fully justified in the circumstances this fascinating debate was held under "Chatham House rules".  So I cannot post on this but will say if you have a chance to go and listen to Martin and Evan on this topic then please do.

I had a short chat with Evan afterwards about Libel reform (I declare a interest) and he said that he will be in touch about the threat to "no win, no fee" defence success fees in libel cases.
Posted by John Gray at Sunday, December 08, 2013