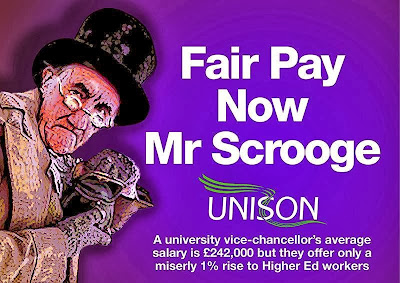 UNISON’s higher education service group executive took the decision to call for a second day of action following discussions with other trade unions and the fact that the employer’s have not increased their pay offer.

UCU, Unite and EIS have also voted for strike action. Here are their reasons:
UNISON's higher education members are facing a fifth year of pay awards below the cost of living;
real-terms pay has been cut 13%; student numbers are up and cash surpluses in the sector are more than £1bn; the English higher education funding body (HEFCE) reported in March 2013 that financial results are stronger than those previously projected in June 2012 despite a fall in public funding; the median pay package of the highest paid staff in the sector is £242,000.

The highest paid employee in higher education receives more than £500,000 a year. So we know there is money available for those at the very top. Meanwhile, more tha 4,000 employees are paid less than the living wage of £7.65 an hour (£8.80 in London).

Across the UK terms and conditions are being eroded while job insecurity is increasing. There is a greater use of zero hour contracts and an increase in the gender pay gap".

See list of London sites where there are likely to be picket lines from last strike on 31 October here
Posted by John Gray at Monday, December 02, 2013