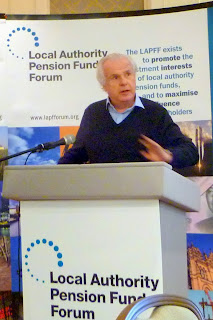 The final speaker was without being at all disrespectful to the others, the best. Former City fund manager, Marks & Spencer Chairman, self professed trade unionist and former Labour Government Financial Minister, Baron Paul Myners.

Unfortunately this session was also held under "Chatham House Rules" which means I cannot report on what he said.

Which is a great pity but I understand that he is writing a book (with help of a top pension blogger and fellow founder member of "Struggle") so I assume there will be opportunities for us all to hear him in the future.

Paul actually joined in on the previous debate on investor collaboration but I assume his response to my question is also top secret? He did say it was nice to see me again (which I think is okay to report?).

This is my one and only Paul Myners story - normally at such conferences he tells me off for being on the Tower Hamlets Council pension committee that sacked him and Gartmore Group as our fund manager in 1990's. Being sacked by Tower Hamlets LGPS he has described as "the worse day of his life".  This time I introduced myself as a Newham Councillor which probably saved me.