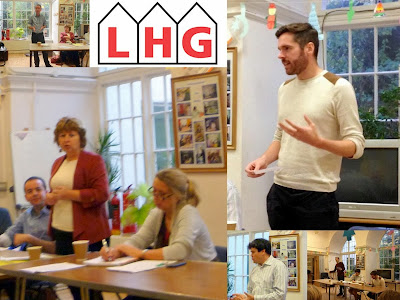 Last weekend I went to this conference run by London branch of the Labour Housing Group (LHG) in St Margarets House, Bethnal Green.

The LHG is the socialist society affiliated to the Labour Party which specialises in housing issues.

Karen pointed out that 26% of London depended upon housing benefit to help with their rent while "Generation rent" cannot go into home ownership. We need to turn benefits into bricks! Even the affluent worry about their children and what is happening to London. Neighbourhoods are changing. 60% of new properties are bought by global investors.

There is a serious market failure. We need to not only use figures when campaigning but paint pictures.

Morgan McSweeney, Head of GLA Labour Office spoke on "Housing on the doorstep: the grass roots campaign". He also believes that now is housing's time. If the Labour message is that this will be the "Cost of Living" election then housing will play a key role.

Make sure your message connects on an emotional level. Test first with your friends and family. Then repeat, repeat and repeat. Define your opponents. Have message discipline but check that local leadership and candidates are saying the same. If not change to what the candidates are saying.

Segmenting people by their values. They are either "Settlers, Prospector's or Pioneers". Use different communication tools. Petitions are wonderful but so is word of mouth. Target taxi drivers and hairdressers. Don't make the mistake that many make in by-elections, when campaigners go to the pub afterwards and exchange stories on who is the most stupid person they have met that day in front of bar staff.

Cllr James Murray, Cabinet member for Housing in Islington on "Labour in Control: winning support for new build". When Labour won control they committed to building 2,000 new homes. Yet there was no infrastructure on new build left in the Council. They set up a "new homes board" which met regularly to "knock heads together" and clear blockages.

At first they were surprised that many local residents were opposed to new build on their estates. Residents were worried about loss of parking and green spaces. To overcome this it was critical to make a "local letting guarantee". Those who lived on the estate in housing need would be considered first for the new lettings. Next, all other local residents would be able to transfer on a "like for like" basis. You need to argue that this is a package which will not only bring new homes but refurbish and improve the estate.

Ben Soffa, Director of Organic Campaigns, on "Using social media: new campaigning across every tenure".  Social Media is not a replacement - it is a supplement. Data and contact details key. Do you want to speak to 150 people during a campaign weekend or is it better to speak to only 75 and get emails for 40?  Push the email choice. Write for an audience and use to spread the message. Like targeting taxi drivers - end each email by asking people to forward it to 5 friends.

Use images tell a story. Twitter is the easiest way, FaceBook tends to be too personal to you. Use an image and maximum 8 words of text and ask people what they think. Don't use a direct action petition quoting the local leader but rather have a quote from a mum living in a overcrowded home who wants help to move.

There was then a Q&A on "What can London LHG do for you?" which being an event for Labour Party activists meant everyone (including myself) wanted to have their say and offer their views and experiences. Sometimes at length and in great detail.  Jamie managed to chair the closing session with humour and authority which meant nearly everyone was able to have their full say and the meeting overran only a little.

I had a very useful conversation afterwards about ways to tackle poverty wages and insecure employment in social care and the role of housing organisations.