"To my comrades, of any party or none" 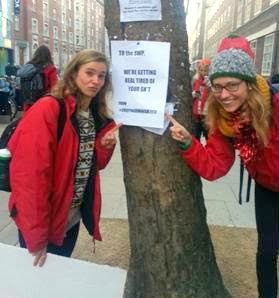 "On Sunday evening, after conference had ended, I resigned from the SWP. I will explain why I have left, but before I do that, I first want to explain why for so many years I stayed with the party even while I often criticised it...."

Check out here what seems to be an honest and raw account of why one long standing member of the Socialist Workers Party (SWP) has just decided to resign over the way rape allegations against a former senior member of its Central Committee have been handled.

Picture of students outside ULU in London last weekend for NUS demo "Fed up of the "SWP SH*T". Hat tip Bristol NUS.
Posted by John Gray at Tuesday, December 17, 2013