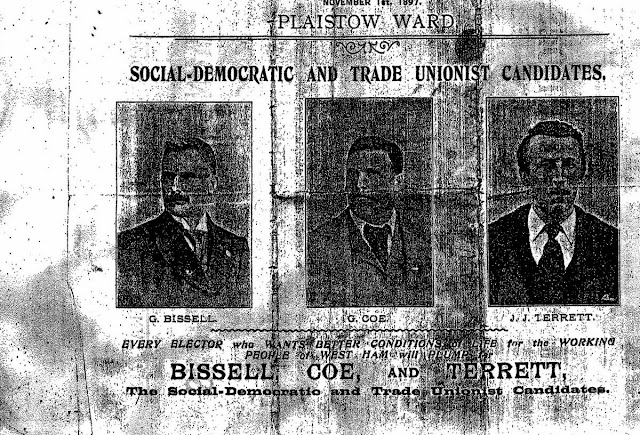 On General election day May 7, a London UNISON colleauge was representing Labour outside a polling station in Ilford North, when an elderly man bought photocopies of an election leaflet, featuring his Grandfather and gave her a copy. She knew that I was a West Ham Labour Councillor and would be interested in this, so she sent me a scan.

It is a remarkable document. Plasitow ward in 1897 also incorporated my ward, West Ham.  At the time West Ham Country borough was the first Council to be controlled by Labour. In 1892 Keir Hardie had been elected in West Ham South as the first Labour Member of Parliament. Even though the Labour Party itself was not formed until 1906. 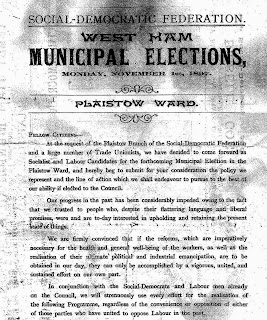 I could only find out more information on the internet about J. J Terrett and nothing on G. Bissell or G. Coe.

Joseph Terrett was elected as a Councillor at some point and wrote a pamphlet called "Municipal Socialism” in West Ham: A Reply to ‘The Times,’ and Others (London: Twentieth Century Press, 1902). Which was in response to an attack on Labour Councils for spending too much by the London Times newspaper. Terrett argued that any extra expenditure was necessary due to poverty and disease. This argument is still live today.

He also wrote a book "The Right Hon. H.H. Asquith, M.P., and the Featherstone massacre" 1906. Which was about the shooting dead by troops of 2 striking coal miners in Burnley in 1893.

In early 1893, Terrett, was a 20 year gas worker and Social Democratic Federation League activist in Burnley. He also called himself "A. G. Wolfe" for some reason. He was however attacked by Keir Hardie for being too aggressive and sectarian.

The last reference I could find on Terrett was standing in a Parliamentary by election in South London 1916 as "Independent Labour". "London Trades Union Protest Committee selected Joe Terrett to stand on a platform of opposition to the recently introduced drink orders introduced on liquor traffic by the Central Control Board.[5] Terrett promptly began his campaign with literature carrying slogans such as "Smash the control board. No more government by secretly-appointed non-representative bodies". 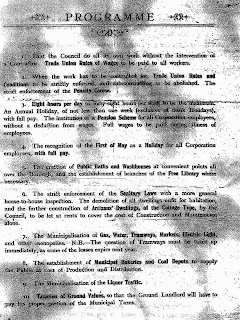 It is surprising how many of the issues mentioned in the pamphlet are still relevant now. Much of which (not all) I would agree with. Click on pictures to bring up details.

If you look at their "Programme" (Page 3) you will see calls for a minimum wage, paid holidays, pensions and sick pay for Council workers. They also call for the council to build homes at low rents.

They want strict enforcement of what we would call nowadays "environmental health" and municipalisation of utilities and other monopolies. As well as making sure Landlords pay their taxes.

The municipalisation of pubs and off licences is not a particularly live issue anymore. 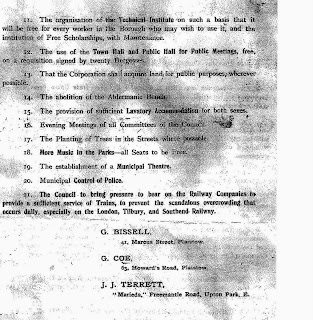 Page 4 of the manifesto calls for free further education and the provision of sufficient toilets for both sexes. I would still agree with the call for evening meetings of all Council committees.

There is "green agenda" (planting of trees) and a cultural call for a municipal theatre.

Finally, I am not that keen on the municipal control of Police but would fully support the final demand that the Council puts pressure to bear on the railway companies to prevent "the scandalous overcrowding that occurs daily".

Many thanks for sending me the pamphlet. If anyone has any further information on it, please let me know.
UPDATE: Check this post about the grave of https://www.johnslabourblog.org/2020/10/socialist-labour-west-ham-cllr-george.html

I was wondering if you have any information on my Great Grandfather George Joseph Stokes who was involved in West Ham politics from circa 1907 when he stood as a candidate in the West Ham ward to his being given freedom of the borough in 1954.

Any information, photos etc you have would be much appreciated.

I was going to repost your request on Newham History Facebook but see you have done this already. I can only suggest https://www.newhamphotos.com/ and on front page of photos is a picture of 1949 West Ham Council meeting and I guess George is sitting there.

Good luck and I will keep an eye out

I assume it was grandad (who is no longer with us) who gave her a copy of the flyer. I was looking for more information on my great, great grandfather and found myself here.
It’s nice to see a record of my family history somewhere.

Hi Russell, please check out this further post about George https://www.johnslabourblog.org/2020/10/socialist-labour-west-ham-cllr-george.html. Together with my ward Councillor colleagues we did lay some flowers on his grave.