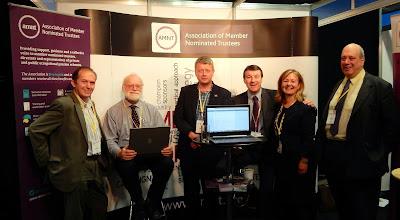 On Thursday I went for a flying visit to Edgbaston, Birmingham to take part in a panel on the second day of Workplace Pensions conference.

The theme of the panel was "View from the coalfield - This session will explore the role of unions on trustee boards, and the conflicts union members may face in their interactions with employers and members".

I was speaking with Bill Trythall (see on right of picture), a trade union appointed director, of the massive university pension fund USS.

The session went okay I think and afterwards Bill and I joined our colleagues at the Association of Member Nominated Trustees (AMNT) stall.

I had to rush back to London for the Newham Council AGM.
Posted by John Gray at Friday, May 15, 2015