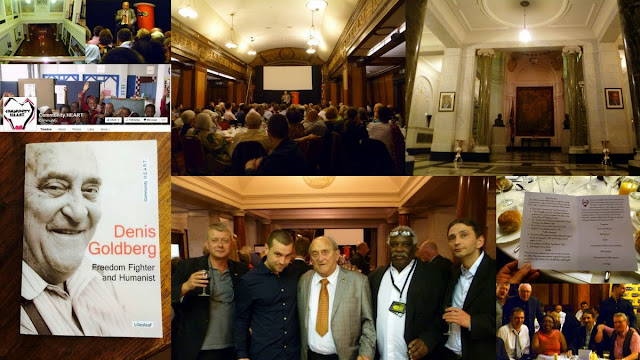 The picture collage is from last night's fundraiser at the South African High Commission in Trafalgar Square for Community HEART and the "Children of a Rainbow Nation".  The development charity Community HEART  was founded by former ANC political prisoner,  82 year old Denis Goldberg, who was the guest speaker. He also spoke at the Greater London UNISON Regional Council on Wednesday, which I missed due to a NJC clash but know that people who heard him at the meeting were near to tears by his speech.

UNISON had a really good presence at the fundraiser including our former Deputy General Secretary, Keith Sonnet .

Denis gave a fantastic "matter of fact" speech about the struggle for freedom in South Africa, its very difficult present and future - and being tried for his life with Nelson Mandela and other comrades during the Rivonia Trial.

Denis spent 22 years in jail for his beliefs. It is inspiring and amazing that he is not angry and bitter about his treatment but still remains positive and optimistic.

I particularly liked the contribution of the speaker who reminded everyone that at the infamous prison Robben Island a collected works of Shakespeare was smuggled in disguised as a Bible. The political prisoners all read this book and highlighted their favourite passages. This was Nelson Mandela's favourite "Cowards die many times before their deaths. The valiant never taste of death but once".

Many thanks to my former UNISON NEC colleague, Isobel McVicar, for all her hard work organising such events.
Posted by John Gray at Saturday, May 23, 2015