Getting the postal vote out for John Biggs as Labour Mayor for Tower Hamlets. 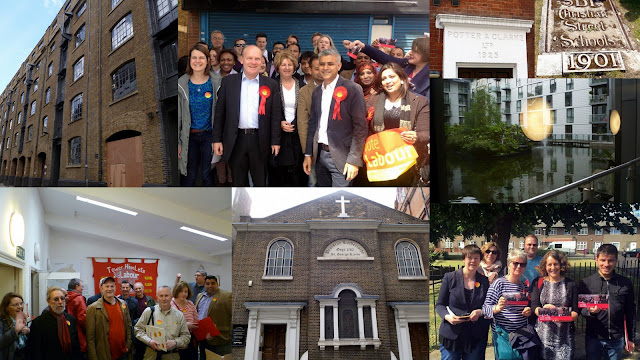 On Wednesday evening I went to help the Labour Party candidate for Tower Hamlets Mayor, John Biggs and was given a bundle of letters addressed to postal voters to deliver in and around Leman Street, Whitechapel. I didn't really know this part of Tower Hamlets very well. There was a number of modern blocks and "gated communities", which are traditionally very hard to gain access. But the concierges (if the block had them) were actually pretty helpful. People are also generally (not always) happy to answer the intercom and let you into a block if you explain yourself properly.

This is also really interesting and historic part of East London.

I came across a restored 18th century German speaking Lutheran Chapel and school which I had never heard of before and it reminded me that Tower Hamlets has always been a multicultural part of London. Apparently at its height, some 16000 Germans use to live in Whitechapel and the area was known as "Little Germany".

A number of traditional East End warehouses and factories had been converted into flats. Some luxury modern blocks that I managed to get into had marvellous hidden lakes, gardens and water fountains.

Yet this is not quite a yuppie paradise. While wandering around rather lost, trying to find some obscure blocks on the map, I stumbled across a very unpleasant attempt to "shakedown" a young French couple for money by an aggressive druggie, who fortunately decided to make off on my arrival.

In our group we went off with Tower Hamlets Labour activist, Dan McCurry, to finish the postal vote letters in Whitechapel. Later that afternoon West and East Hammers joined John Biggs and Sadiq Khan MP for a #labourdoorkock in Stepney Green.