On the Knocker for John Biggs in Mile End 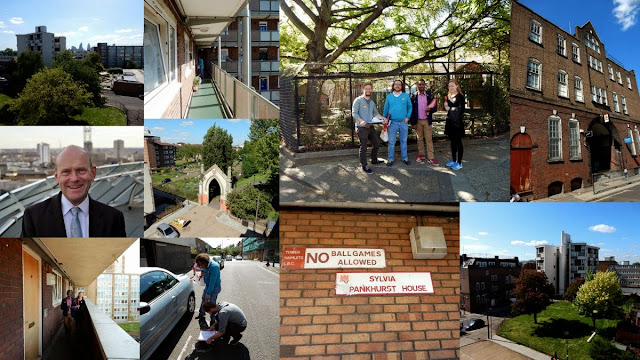 After the Regional UNISON agm on Saturday and while cycling home, I stopped off at the Tower Hamlets Labour Party HQ in Bethnal Green to help campaign for Labour Mayor candidate, John Biggs.  I was asked if I minded going out with a canvass team led by former Tower Hamlets and now Barking and Dagenham Labour Cllr, Bill Turner. I responded that I had a very wicked previous life and would join my UNISON comrade, Mr Turner.

We were in his former ward in Mile End, which I had helped canvass for Bill in 2006 with a good friend and trade union comrade, George Woznicki, who is sadly no longer with us. During that election we had to contend with teams of fascist BNP activists.

I thought that the door knock for Labour and John Biggs went okay and I had some decent conversations with former supporters of "Tower Hamlets First" and even TUSC, who felt it was time to move on, vote for Labour and give some good governance and stability to the borough. However, this election will not be a walkover.

While in the light of events I like many others personally do not believe in the Executive Mayoral model for local Councils, I do think it is really important to elect capable, decent and honest Labour politicians such as John Biggs (and then hopefully reform the position). This election is really important to East London and I hope that everyone will turn out and do their bit to win it.
Posted by John Gray at Monday, May 18, 2015