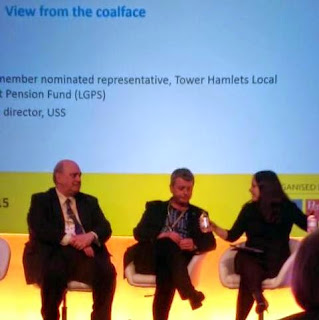 This picture is from the panel seminar last week at the "Workplace Pension 2015" conference in Birmingham.

I was with Bill Trythall, who is a fellow AMNT union appointed trustee on the massive USS Pension scheme. The chair was Louise Farrand from "Engaged Investor".

We took a number of questions from the chair and members of the audience on amongst other things - time limits for trustees on schemes; do trade unions help bring diversity and how can we tell if our pension board is any good?

My response (and since I was obviously not making notes I won't report on what Bill said) was "Yes", we should have time limits on trustees serving on a board. It is wrong that people like me have been on boards for 20 years. We need new blood and realistic succession plans. But so should all our professional advisors be similarly time limited to 5-10 years maximum.

I think that trade unions do help drive the diversity agenda, since not only is equality and fairness a reason for our existence, we know that if a company does not recruit, for example, any women to its board, then it is is ignoring the potential talent pool from half the population. That is a bad business decision and ignorant companies who do so will suffer in the long term.

This has nothing to do with political correctness but a well founded belief that companies who don't discriminate, do not  cause harm to its workers, destroy the environment, employ child labour or bribe public officials will in the long run be far more successful businesses to invest in than does that do.

My response to how we can tell if we are doing a good job or not as pension trustees will be to see firstly how we perform according to our benchmark, when compared to our peers and at our triennial valuations. But also we should see how open and transparent we are with our members and other stakeholders, do we seriously challenge our advisors, how realistic are our assumptions about future performance and liabilities, do we really drill down on all our fees and transaction costs and do we take our responsibilities as owners of capital seriously?

We ran out of time at the end but I think that Bill and I enjoyed the seminar and hopefully those who watched and participated did so likewise.