The West Ham Count 2015 at the Olympic Velopark 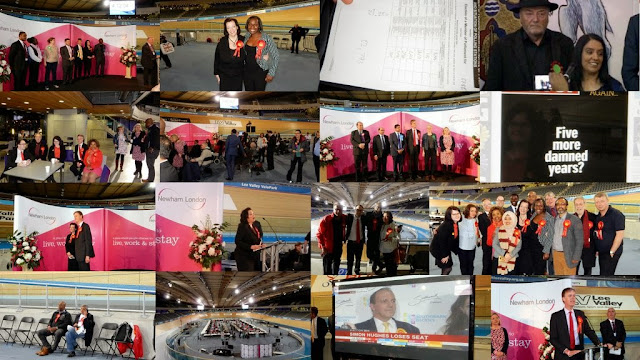 I have mixed emotions looking at this collage. On the one hand we had a fantastic victory in West Ham that night with our Labour MP, Lyn Brown, being re-elected with a majority of 27,986 and 68.4% (increase of 5.8% from 2010) share of the vote.  Charlene McLean was also re-elected as a Stratford & New Town Labour Councillor with the highest ever vote in the history of Newham Council.

Yet we clearly lost the national General election.

This morning I had my Councillor surgery in my ward and a young mum with her son came to see me. She has an eviction notice since she cannot afford the rent on her privately rented 2 bedroom flat. She has always worked for the NHS but due to benefit caps, she now cannot afford to live in one of the least expensive parts of London. She has even been refused access to so called "intermediate Social Housing" since she does not earn £40k per year.

What on earth will happen to her and her son under a future Tory government committed to billions of pounds of further spending cuts?
Posted by John Gray at Saturday, May 09, 2015