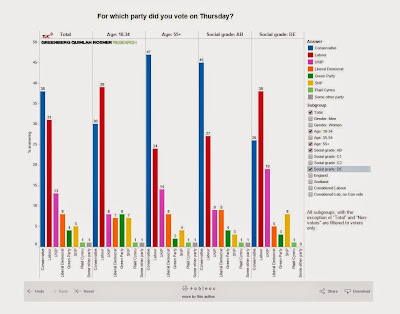 Some more thoughts on May 7th and the aftermath.

First check out this post in TouchStone by Newham's finest, Nigel Stanley, on the post election day TUC survey.

Nigel argues that this evidence (of voters who considered Labour but ended up voting for someone else) suggests that Labour is not seen as being hostile to aspiration but lost out on economic trust and fear of SNP.

Nor were we seen as too left wing or too tough on business. In fact we were seen as too soft and should even have increased taxes more on the rich?

However, it is clear that Labour was punished for not being "tough" enough on welfare and immigration.

As you can see from the chart that older and more wealthy voters supported the Tories by a wide mark. The young and the poorest, who don't vote as much supported Labour.

I actually think it is too early to decide the future of the Party until we fully understand why we lost. This will take time.
Posted by John Gray at Sunday, May 24, 2015