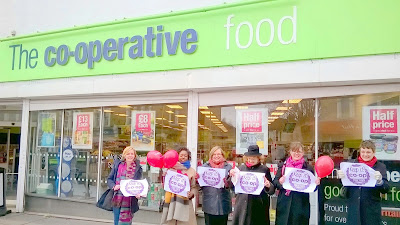 As a Co-op shopper and Party member this is great news. I was out canvassing in Tower Hamlets yesterday afternoon for John Biggs as Labour mayor.

In the face of the General Election defeat is was even more important than ever that the Labour movement family (The Labour Party, the Co-operative Party, the affiliated trade unions and socialist societies) - keeps together.

I think that this has been a bit of a "wake up" call for the Co-operative Party to better assert its voice and distinctive cooperative message in the wider Labour Party. While the financial disaster that the Co-operative Banking arm got itself into reminds us that we also need effective as well as democratic governance in co-operatives and mutuals.

Picture of West Ham Labour activists outside the Co-op in Forest Gate, Newham.
Posted by John Gray at Sunday, May 17, 2015