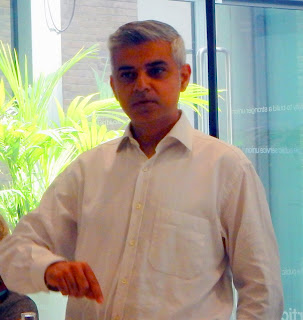 Hat tip Labour List. I will look at all the London Mayoral UNISON candidates Housing policies. A living rent policy would be fantastic. What is the point of a Living wage if you did not have a Living Rent policy?


"Sadiq Khan, who’s in the running to be Labour’s candidate for London Mayoral, has made his first big policy announcement today.

Khan, who is also the MP for Tooting, said he would introduce a London Living Rent to bring down the price of renting. This would be below-market rent that would be offered in new build properties and it would be a third of average renters’ income. He explained that this Living Rent would also make it easier for people renting privately in London to save up for their first deposit to buy a home.

The London mayoral hopeful also said he would create an not-for-profit letting agency while naming and shaming landlords who treat tenants badly and campaigning to give tenants more powers over getting repairs done to their property.

Alongside these plans Khan, who is a former Shadow Minister for London and Shadow Justice Minister, said he would campaign for the Mayor to have the power to freeze rent rises.

In terms of building new homes, Khan would ensure there is more public land available to build on, enforce fair and clear rules for developers, and use the housing investment budget to start a new social home-building programme.

Khan has explained the thinking behind his proposals:

“The two million Londoners who rent have been badly let down by the Mayor and Government, with many Londoners now spending over half their income on rents. The Tories didn’t even mention private renters in their manifesto.

“As Mayor, I’ll offer a London Living Rent, create a London-wide social letting agency, and fight for new powers to freeze rents. Together we can make housing more affordable for thousands of Londoners – helping them save for a deposit.

“We’ll work with the good landlords who treat their tenants well, and I’ll take on bad ones, with stronger rights for tenants to get repairs done. As the Tories shrug their shoulders, I’m determined to show that we can do more to help Londoners who rent.”

“It’s heartening to see a mayoral candidate focus their sights on the private rented sector, recognising that the chronic affordability crisis in London cannot go on. However, if we want our capital to continue to be a vibrant and diverse city, we would like to see the ‘London Living Rent’ extended beyond new builds and into the whole of London’s private rented sector, benefiting millions of tenants in the process.”

Housing is a big issue ahead of the mayoral election next year, Diane Abbott, Tessa Jowell, David Lammy, Gareth Thomas and Christian Wolmar have also all outlined proposals to address the housing crisis in London".

Email ThisBlogThis!Share to TwitterShare to FacebookShare to Pinterest
Labels: London Mayor 2016, What is the