West Ham "on the knocker" for John Biggs 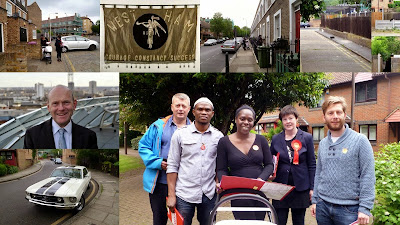 Picture collage from yesterday of West Hammers (and a East Ham comrade) "on the knocker" for John Biggs as Labour Mayor for Tower Hamlets.

A positive canvass for John and Labour, although many people were away since this was a Bank holiday weekend. I came across some very negative comments about the Executive Mayoral system but was able to reassure people that in the hands of a honest, decent and principled candidate such as John Biggs, they have nothing to worry about.

Rain eventually stopped play. I had some interesting but confusing interactions on twitter trying to direct West Ham activists to join our team. Twitter is all well and good but a mobile telephone call is probably still best in these circumstances.
Posted by John Gray at Sunday, May 24, 2015