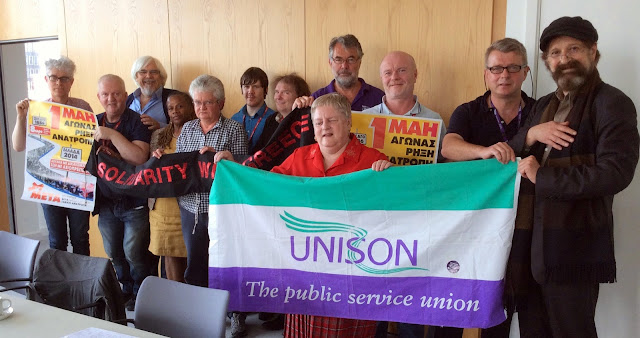 Picture is from yesterday's AGM of Greater London UNISON International and Europe Committee. Kim Silver was re-elected Chair and I was  re-elected Vice Chair.

Below is the draft report on this part of the meeting. I hope to also post later the presentation by the VSC.

"Paul Mackney and Isidoros Diakides from the Greece Solidarity Campaign‎ (GSC) spoke on the current situation in Greece following the election of the Syrzia government earlier this year. Greek workers are fighting back against EU-imposed austerity measures, with 32 general strikes having taken place. GSC encourages 'solidarity tourism'! The prominence of women both suffering the effects of EU austerity and in resistance to them was emphasised.

Isidoros explained that there is no debt; it is an instrument of the EU and the IMF to impose neo-liberal policies onto Greece, as previously they have done with 'developing' countries. The German-inspired stereotype of 'lazy Greeks' is belied by Greek workers working the longest hours in Europe. A key component of the EU's policies is to dismantle employment protection and the welfare state, both of which have been fought for by generations of Greek Unions. When British and other Unions ask what they can do to assist, the answer Greek Unions give is that they should fight the austerity policies in their own countries. Without social solidarity in Greece the country would have collapsed.

Although the German government wants to impose cuts, it doesn't want Greece to cut its’ (mainly arms) contracts with Siemens.

John Gray asked why the Greek government isn't planning to leave the eurozone? Ensuing disruption is the answer offered. Membership of the EU is associated with prosperity, not austerity. Developing events may lead the Greek people to the opposite conclusion, and conclude that the only future lies outside the EU, but that is not their current view".
Posted by John Gray at Tuesday, May 12, 2015