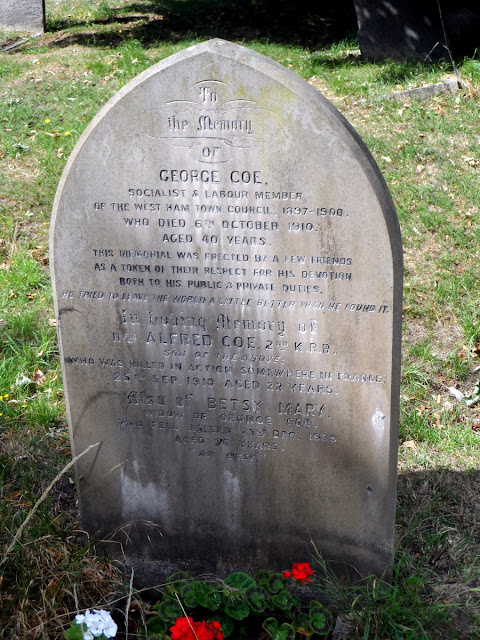 During the summer I had a wonderful email from Plaistow resident and local historian, Alan Regin, connected to a post I wrote on this blog following the general election in 2015.

On election day 2015 an UNISON colleague of mine was acting as a Labour polling agent outside an Ilford polling station and had been given a copy of an early West Ham "Labour" election pamphlet from 1897, which they sent to me knowing I was a local Councillor.

This leaflet mentioned the "Social Democratic and Trade Unionist" candidate "G.Coe" who I googled and checked what records I had to hand but was unable to find any further information about.

Alan had seen this post and he sent me a photograph of  a "George Coe" headstone in the West Ham Cemetery. It seems that George had indeed been elected in 1897 and remained a Councillor until 1900.

What is particularly noticeable about his gravestone is the wonderful epitaph "this testimonial was erected by a few friends as a token of their respect for his devotion both to his public & private duties". He tried to leave the world a little better than he found it".

I hope to go and pay my respects to George with Alan and modern day Councillor colleagues in the near future.