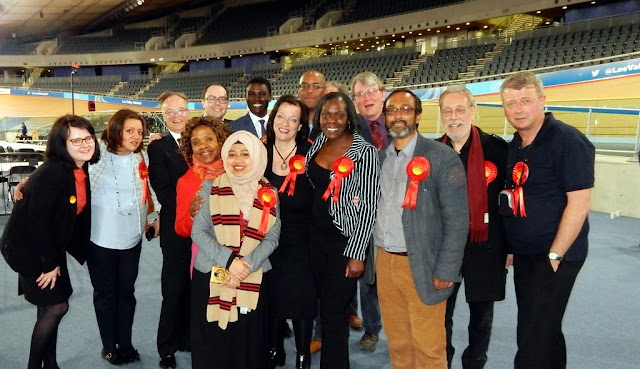 This is the picture of the West Ham Labour Party election count team from 04.30 am this morning with our two successful candidates, Lyn Brown MP and Cllr Charlene McLean. This was at the Olympic Velopark.

Charlene was re-elected as Newham Councillor for Stratford & New town ward with a majority of  2,829 and 57% of the vote.

Nationally of course we were well beaten by the Conservatives who will now form the next Government. Once the dust settles down a bit I will post some thoughts on what happened and what we should be doing next.

Congratulations, to Stephen Timms in East Ham who also had a stonking victory for Labour with a 34,252 majority and 77.6% share of the Vote.

We were really pleased at the count when we heard that Wes Streeting had won at Ilford North by 589 votes and commiserations to Polly Billington and her team at Thurrock.
Posted by John Gray at Friday, May 08, 2015