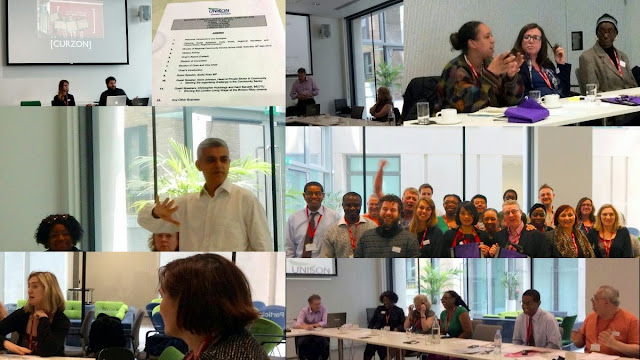 Collage is from the Regional AGM on Saturday for delegates from branches with Community Service Group members (Housing Associations and the Voluntary sector).

The meeting started on a somber note, as we stood up to pay our respects to Colin Joseph, who recently passed away suddenly. Colin was a long standing case worker for the Voluntary Organisation branch and will be sadly missed.

First speaker was our newly elected lay regional conveyor, Yvonne Green, who described herself as "the new Gloria".  She thanked all members who got involved in the election. She had done her bit in Croydon North and while devastated at the prospect of 5 years of Tory rule, encouraged all members to stand up to them, join Labour link and get involved in your branches and the Party.

UNISON Regional Secretary (and vice chair of Labour Board), Linda Perks, spoke about the last 5 years and how we had actually defended our members better than expected. We have had some terrible struggles in Community, especially in care and support but are now having some decent pay settlements in housing management organisations.

She thought a major reason for the defeat was that a third of the electorate did not vote. She wants us to now go on the offensive with the Tories and their attacks on working people. Expose their obscene employment practices such as unfair zero hour contracts. Linda also called for UNISON members to help build our Labour Link organisation and get involved in local Labour Parties and explain our case. How else will the Party understand us?

Our keynote speaker was UNISON member, Sadiq Khan MP (and Labour London Mayoral candidate), who did his best to cheer us up after the General Election result.

Sadiq thanked us for all the work that the unions did and said that he thought that one reason why Labour did better in London than other parts of the country was its good links with the trade unions.

He then reminded us of what Tony Benn said about politics and defeat "There is no final battle, there is no final defeat. There is the same battle over and over again. So toughen up - bloody toughen up". Sadiq believes that we can and will win in 2020 and we need to start by winning the mayoral campaign in Tower Hamlets.

Sadiq had to leave for another meeting. In the Q&A I pointed out that we must never accept the argument that Labour lost the election because it was "too left". With hindsight we should have realised that we were never likely to win because it is a historical fact that voters in this country will give any government a second chance. Especially if the economy is seen to be improving (aka "its the economy stupid").

In the collage is a great photo of retiring Chair, Charlie Hore, thanking our UNISON Regional Organiser, Colin Inniss, who obviously thinks things are not tough enough in our sector since he soon going off on an unpaid 6 month career break to go hang gliding and mountain climbing! Colin will be a difficult act to (temporarily) follow but the union is interviewing soon for his replacement.

Next on agenda was Dave Johnson, national secretary, on "meeting the organising challenge in the Community Sector". The future of the union depends on us keeping our current density and organisation in sectors that will be outsourced under the Tories. To me it is clear that we have to organise or die.

Final speakers were bectu union lay activists, Christopher Hutchings and Kerri Sandell, who told us about their successful campaign to win a living wage for all workers in the Curzon cinema chain. This is a pretty inspiring campaign which all of us can learn from. However, it was not all about publicity stunts and embarrassing the employer (but that was important) but also about a lot of hard work, organisation and graft by local activists supported by their national officers (and most importantly making sure that there was also some fun and laughs).

Despite the depressing backdrop, this was a really positive and forward thinking AGM. Congratulations also to new Chair, Mitsy Harmon and vice Chair, Tony Power.