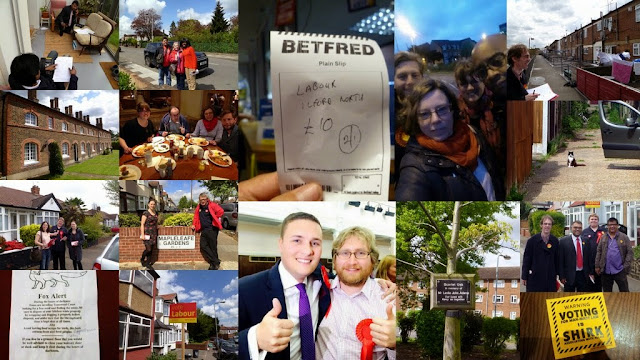 There was loads of Labour Party and trade union supporters in Ilford North on Thursday, so this is only a limited snapshot of what went on that day.

Westhammers were there at 5am to deliver reminder leaflets (followed by a well deserved breakfast in the Fairlop Oak) and out "on the knocker" and tele-canvassing for the rest of the day until 9.30pm. I was in West Ham in the morning and later went out with a number of Ilford North teams during the day and early evening. I put a £10 bet on for Wes Streeting to win at Ilford North (and now look forward to the winnings).

At one house I called at an elderly man answered the door and told me that this was the first time he had ever voted Labour. I asked if he minded telling me why? He said that it was because the Tories had said that they would force housing charities to sell their homes. This was unforgivable since it would bankrupt them and further reduce the supply of affordable homes.

On Barkingside High Street, a young woman stopped us and told us she was homeless and would we build more Council homes if elected? I told her that Labour is committed to building a million new homes including Council, Housing association and Private if elected.

I was pleased that I was with fellow UNISON members in every team I went on.

There was even a  direct West Ham connection since at one polling station, an elderly man bought along a copy of his grandfather's manifesto, who had stood as a Labour & trade union candidate for Plaistow ward in the 1897 West Ham municipal election. I have been sent a scan of this manifesto by a UNISON organiser and will post on it soon.

Wes Streeting overturned a 5,000 Tory majority to be elected as the Labour MP for Ilford North. It was thrilling news when we heard it at the West Ham Count.

In the collage there is a great picture of Wes and his agent (aka indie rock star) Matt Goddin, who is a top organiser (whose much better half Simian was also an excellent if somewhat reluctant canvass team leader on the day)
Posted by John Gray at Saturday, May 09, 2015