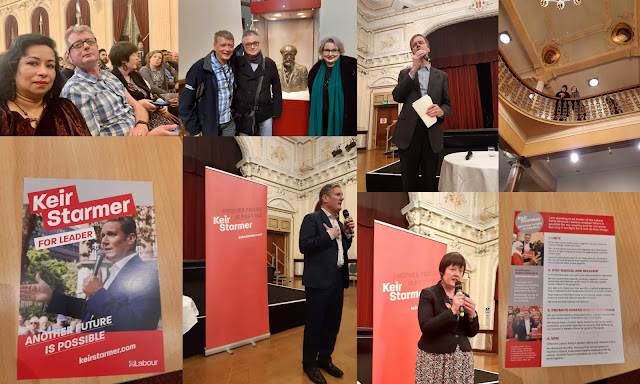 Yesterday I helped organise a meeting for Labour Party members and affiliates to meet Keir Starmer, at the Old Town Hall in Stratford.

In a packed meeting he was introduced by Newham Councillor, Susan Masters, who explained that she was proud to have been a Jeremy Corbyn supporter and now feels the time is right for Keir to be our next leader.

Keir spoke about his policies, his beliefs, his background and most important, his vision, if he is elected as Labour Leader. He reminded us that in this same town hall in 1892, his namesake Keir Hardie was declared as the first ever Labour MP.

Keir called for unity & end of factionalism in the Party. Voters will not elect a divided party.

Afterwards there was an extensive and wide ranging Q&A then East Ham MP, Stephen Timms, closed the event by posing the question that the next leader of the Labour Party must be the one who is best placed to defeat the Tories.

(great picture in collage of Hackney Councillor Yvonne Maxwell, me and her partner, the reluctant Starmzy and my Royal Court of Justice libel comrade, Dave Osland, with bust of original Keir)
Posted by John Gray at Tuesday, January 28, 2020