Campaigning for Sadiq in Carpenters with Lyn & Unmesh 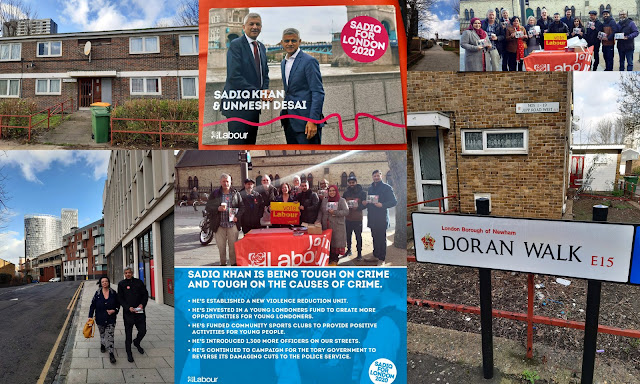 Yesterday was a London wide campaign day for the re-election of Labour Mayor, Sadiq Khan and Labour representatives on the Greater London Assembly.

We met at a Labour stall in Stratford for the obligatory group photos then split up into 3 canvass teams. The Newham Mayor, Rokhsana Fiaz, took a team into Maryland while  the other two teams went to the Carpenters Estate. I was with our local MP, Lyn Brown and our Cities and East Assembly member, Unmesh Desai.

Residents were as usual in Newham, pretty positive and supportive but a little surprised to see us campaigning so soon after the general election. There was not much recognition that the GLA elections are taking place in May so we have lots of work to do. I recognised some of the residents who have been participating in the monthly Carpenters forums on the future of the estate.

The GLA elections are crucial for Newham, even more following the General Election catastrophe. Sadiq has provided us with £107 million to build truly affordable Council homes as well as much needed funding to tackle rough sleeping. We desperately need a Labour Mayor and Labour Assembly members in City Hall to continue this work.
Posted by John Gray at Sunday, February 02, 2020

Tough on crime and the causes of crime?... are you having a laugh! Look at the statistics.

The Metropolitan police recorded 149 homicides in 2019 up to 30 December. In five years the homicide rate has increased by more than 50%, from 94 cases in 2014.(The Guardian).
All the Mayor does is bleat that its someone else's fault, and never comes forward with any meaningful actions... other than playing a vocal part in the past in criticising stop and search.

It was a Labour Government who passed legislation in 2008 allowing for the early release of terrorists.. where was Sadiq then? The London Bridge attacker was sentenced under the Law set by the Labour Government and now Boris will have to rectify that crap piece of legislation.

In a speech to the British Chambers of Commerce, the Labour leader (Corbyn) will say his own party's "light-touch" approach to financial regulation led to the banking collapse in 2007 and 2008 which nearly bankrupted the UK.
Actions have consequences John...

The Tories have now been in power for nearly 10 years. Bit rich to blame Labour. Maybe it was a wrong that Tory coalition scrapped Labour security orders?

It's great having Boris as PM. I love it that the Tories have been in power for nearly ten years, and now it comes with the swingeing endorsement of many former diehard working class life long Labour supporters, many of whom voted for Boris!! Five more years with a thumping great majority and the real prospect of Labour voting in another "detached from reality" party leader with yet more universally unappealing, unrealistic, "woke" policies... irrelevant to the real needs... what's not to like!
Keep up the good work so that we can ensure Labour once again shoot themselves in the foot for hopefully another ten years..fantastic!

Its a free country. You can vote for who you like. Even Boris. We will get our act together and win.

That says it all... "We will get our act together and win"... at last some recognition from you regarding the shambles Labour are in. Private Eye have Corbyn as the Captain of the Titanic in this issue.. spot on! However we still had to read your tripe about how you thought Labour would win before the last election when infact you knew all along what a shambles Labour was.
The problem is lack of credible talent, lack of a credible leader, and policies that don't stack up. Other than that you are in great shape.. and long may it last.

Relax and chill anon. Why are you so angry and aggressive all the time? Not good for you.

Remember Boris is actually our secret weapon since on past form he is bound to do something stupid and get himself in trouble.

being angry and aggressive all the time isn't "mis speaking"

Don't know about that John, but I do know that voters are tired of your Left Wing virtue signalling. You talk about anger and aggression but its more likely to be a smoke screen by you regarding your own behaviours...

Well done! at least now you are only being a bit rude and not "Mr Angry and Aggressive". There is hope for you :-)

I have heard from a neighbour Newham Police has merged with Waltham Forest Police. I also learned, there is only 1 police officer plus two 2 PCSO for my area. This is worrying. Is that 24 hour cover or per 8 hour shift.


I posted on the comment boxes about problem neighbour (temporary accommodation), thankfully they were moved out. However, they kept saying they needed evidence, which was n't fair as it puts me in jeopardy.

You indicated, that if a problem tenant needed to be moved out, they would have to work with the council ASB and police. To help providence to support eviction. In my area, there is one police officer. If the police are so under resourced. How can they support evictions of problem neighbours?

I have new neighbour (the landlord still chose to rent the property out via a temporary accommodation agency). I don't know how this will turn out.....

You're a funny guy..

Anon 12... Newham has some of the worst deprivation in the country despite having a Labour council for decades..go figure. Its in the interests of the local politicians to make sure the Borough remains poor because otherwise they get voted out. If you want to see real change you need to get some local representatives that can make change because the current tired old formula, after decades of attempts, just doesn't work.

You are describing the consequence of Tory cuts. The Met Police has lost £700 million since 2010. Newham Council can and will take enforcement action on ASB but we are not the Police and we also have lost £200 million in government cuts since 2010.

Anon 08.04. Labour is in power because our residents trust us to do out best for them and also due to the useless opposition parties in Newham who are too lazy/scared to door knock and speak to people but prefer to by anonymous online armchair warriors