What Will A Future Labour Government Do With the NHS? 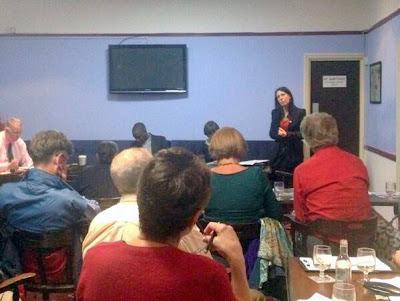 "The night could have been so different.

If Debbie Abrahams – Parliamentary Private Secretary to Andy Burnham - hadn’t been held up, delayed by a crucial lobbying bill vote. If she had kicked off rather than arriving to find the course of debate already charted. If the night’s audience hadn’t been such an articulate, well-informed collection of health campaigners, the discussion might have stayed on brief.

As it was, by the time the evening’s concluding speaker arrived, the penny had dropped: Where the NHS is concerned, the question isn’t what a Labour government might be able to do in 2015 (if elected). The sad reality is that if we don’t fight to preserved our NHS services now, if we don’t share ideas and resources, stand together as unionists, activists and local service users, there will not be an NHS to work with when Ed moves in to number ten.

Set against the background of the Barts Trust’s colossal debts, huge planned cost-savings, on-going staff review and rumoured attacks on local A&E services, Unison Regional organiser Jay Williams kicked off the debate in Debbie’s absence and took us to the very heart of the experience of being an NHS worker in the times of the coalition. Starting with the well-worn current strains on the NHS – an aging, growing population; poor public nutrition and a growth in mental health issues – he charted the way our present government have cast such problems as a crisis in the NHS for which the only remedies are private health insurance and privatisation, where to Jay the problem is largely one of poor management. We heard about workers seeing their jobs rebanded and downgraded, while the pay protection policies designed to slow the impact were whittled away and the lure of comparatively lucrative foreign pay deals brought about a skills drain in areas such as midwifery. 10% of vacant posts are left unfilled with temporary staff covering at far greater cost. We learned of the huge cuts to ambulance services and the failure of the 111NHS number.

To say the picture was bleak would be an understatement and yet Jay’s speech was no study in fatalism and there were plenty of suggestions of ways to fight back. His ideas of lobbying the CCG or contacting union officials at Newham General, might have raised wry smiles among local health campaigners who’ve hit walls down such routes, while his pleas to lobby our council for changes in public policy might have felt somewhat belated when faced with a local authority that’s delivered everything from free school meals to primary school students and free swims for pensioners, to initiatives like ‘Every Child A Sportsperson’. But where one contact, route or idea was deemed unsatisfactory, another was soon on hand.

Hurrying in on the tail end of Jay William’s opener, you had to feel for Debbie Abrahams. I should stress that to have Andy Burnham’s articulate and committed Parliamentary Private Secretary attend at all was a real coup for Newham Compass. Not just because she’s an MP at the very heart of our Shadow health team, but because you can’t argue with the dedication of someone who entered politics not as a career move but as a response to the privatisation she’d witnessed as chair of Rochdale Primary Health Trust – a post she resigned, giving up on a successful career in health, to fight for the core values of the NHS within the Labour Party.

Her description of Labour’s plans was both clear and comprehensive: A commitment to the World Health Organisation’s definition of health as a holistic mix of the physical, mental and social; a desire to repeal the Health and Social Care Act 2012, but to avoid further top-down reorganisations in favour of far greater integration coupled with a bigger role for local authorities; public health initiatives to tackle drinking and nutrition, and the abolition of zero hours contracts…All really good stuff (if we can keep the NHS alive long enough!). The only moment of controversy lay in Debbie’s mention of solutions to paying for social care, whether through a Dilnott style cap or a levy on estates – moves questioned by one attendee as an affront to the original notion of the NHS as providing care free at the point of delivery from cradle to grave.

As the evening drew to a close, however, it felt like the real winners were local health campaign group ‘Newham Save Our NHS’, strongly represented at the debate. If you’d like to join them and help defend East London’s Health Services now, do get in touch and check out their website at newhamsaveournhs.weebly.com or attend one of their monthly meetings at the café in Central Park, East Ham.