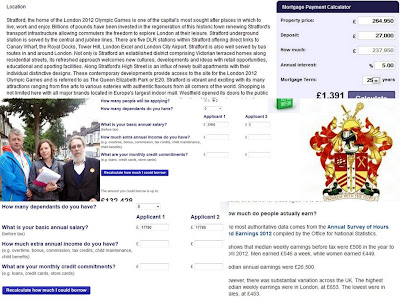 It was a pretty successful and I think many residents were pleased that we were coming to speak to them and ask them their views.

I had some ear bashing about litter, dog mess and waste bins left in the street. But on the whole, it was pretty positive and solid Labour.

When we had finished we came across a local estate agent who was showing a couple a property for sale. We asked how much this property was. It was a 3 bedroom end terrace in need of improvement but it was for sale for £265,000!  If was modernised it would be worth £310,000.

What a huge amount of money. Who can afford this? When I got home I had a look at the various property websites.

If you could put down a 10% deposit you would still have to pay £1,391 mortgage repayment (interest and capital) each month to repay £265,000. This is also at historically low (and long term unsustainable) interest rates.

Newham has been traditionally one of the cheapest boroughs to rent or buy in Greater London.  But if you are on low wages or have no big deposit who on earth can afford to buy or rent anywhere in London?
Posted by John Gray at Sunday, September 15, 2013

The council has to return bins in the rightful place. Imagaine if you go on holiday on Wednesday and the bin men come on Thursday and leave bins on the pavement or the lid left open. This is a sign that no one is at home.


In the past Newham would leave empty bins on the pavement and then a someone else from Newham council street enforcement, would threaten fines for not putting bins back in front gardens. Never mind that a person is out.

It is frustrating for those, who want to move elsewhere. The area is continuing to deteriorate.

Labour was largely responsible for run away house prices during its time in Government. It could have moderated bank lending on housing.

It does not help people like me, who seem our goals getting further away. At least people who are renting can move elsewhere with much more ease, then those tied down my mortgages.

Your statistics are pants, as you can still buy a foothold in Newham for up to £152,908. Why do you select a three bedroom home in Stratford?. You seem to suggest people should not buy single or two bedroom homes, but move straight up to three bedrooms.

People will never be able to afford homes, because Labour are interested in creation of minimum wage jobs like supermarkets and retail parks. There is no career path to better paid jobs.

For those stuck in Newham, I would like to see the council improve the local area. Although, the jet skis near the cable car are a step in the right direction. Can you give whoever thought of it a medal. More needs to be done.

I understand that the wheelie bins should be put back to same spot but will check.

I have asked a resident who also told me this to send me a copy of the ticket.

I think you are wrong and house prices are rising in Newham faster than the average for London. Which I personally don't think it s good thing.

Price and rents are just completely out of reach.

Of course people trade up if they can but 3 bedroom properties have been the traditional goal of British families for generations. These are terrace not semi detached.

Stop being so silly about Labour "wanting minimum wage jobs".