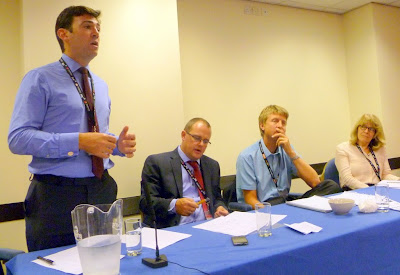 She said that the problems between Health and Social Care has been going on for decades. She used as an example the age old dispute of who pays for a health or a social services bath for a client.

If the NHS recommend this then it is free, if  it is social services, then this same bath could be means tested!

While she is explaining this, Andy Burnham comes into the meeting. Karen apologies for starting without him and he says "just carry on". Karen says that is okay since, I have just been very horrible about you! (joke)

Andy spoke about the 2009-2012 - 66% rise in the very elderly A&E admittance via ambulance. Hospitals are becoming warehouses for old people. We need instead to invest in preventive care to also save money.

The Tories are running down the NHS. According to them "GPs are to blame for A&E waits" while all nurses are "uncaring" and hospitals are just "coasting".

The press and Tories criticised the last Labour Government proposal on this issue as the "death tax".  Yet we now have already the dementia tax,  Which is surely worse? Andy also reaffirmed his pledge to abolish the Tory Health and Social Care Bill and that the NHS will be the preferred provider in any future Labour NHS reforms.

Andy made it clear that markets are not the answer in health and social care. The UK is one of the few countries to spend under 10% of GDP on health care because it has such an efficient national service.

Justin Bowen from the GMB  (another former Tower Hamlets bod) said that Andy's comments was music to his ears. The problem however is money. Health and social care reforms will not be totally cost neutral. It will cost more. The crisis in social care now is all about money.

Andy countered by saying that there will be huge savings by bring together health and social care but also provided people knew what they would get, they would be willing to pay more for quality services.

My question to Andy and the panel was about the present decimation of wages in the social care sector (I mentioned the disgrace at the "charity" Future Directions which he was well aware of)  and what are we going to do about future pay in the voluntary care sector?  Much of which is minimum wage.

I think it is fair to say that Andy was very supportive about the need to have decent pay in our sector but he and Labour are not yet in power.  So, roll on 2015.

So you think Labour would be the answer in 2015 interesting.

Not to sure with Miliband because simple put I've no idea what he is about Burnham of course can run hot and cold. Being disabled with a life threatening illness and disability the welfare reforms Labour brought in nearly failed me. I had my ATOS medical, the ATOS doctor gave me fifty points , and stated I'd not work in the short or the long term, he stated this person is obviously severely disabled, with ATOS I lost my claim and was placed in the get back to work. I went to see an activist who is a solicitor he got in touch with the DWP who stated they look at it again obviously something did not gell.

Six weeks of waiting worrying getting half benefits having all of my life turned upside down they came back saying yes they had reviewed my claim and I had won the review, imagine if I did not know this person.This was labour WCA and welfare reforms.

Labour came up with Blair saying we should pay for GP appointments the Tories are doing the same or looking at it.

What is to say labour not going to do the same with this, trust and I do not trust labour.

The first job I had was as a welfare rights worker in Edinburgh representing unemployed and disabled residents claim benefits.

If you think there is no difference between Labour and Tories then that is your right.

It doesn't however mean you are right.