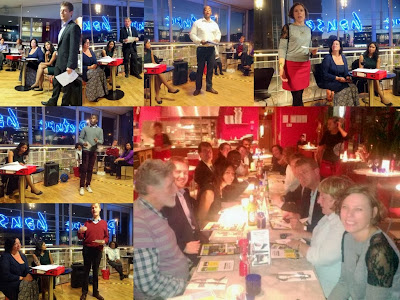 I arrived too late last night at Stratford Picture House for the "Pick of the Policies" competition due to
Tower Hamlets Pension committee.

But it had obviously been a great success. Lots of people still around who spoke about a lively and informative evening of political debate.

The Pragmatic Radical model was "Have you got a policy idea that you think Labour should adopt? If so come and pitch it, in just 90 seconds, at the Newham Top of the Policies event".

Newham MPs Lyn Brown and Steve Timms chaired and were time keepers. There were 16 pitches and the winner was West Ham, John Saunders, who spoke in favour of fixed terms for Council Executive Mayors!

Second was Aleen Alarice on "info Sharing" and joint third place was Alan Griffiths on "Housing"; Gavin Pearson on "profit from planning" and Newham UNISON NEC and West Ham CLP Kim Silver for the ending of Zero hour contracts.

Afterwards a group of us finished off the evening at the Pizza Express downstairs (see picture).

Who says politics can't be fun?

Many thanks for Julianne and Farah for organising this event. Hat tip Ayesha, Gordon and Seyi for pictures.
Posted by John Gray at Friday, September 20, 2013