March and Lobby of Tory Conference to Save the #NHS299 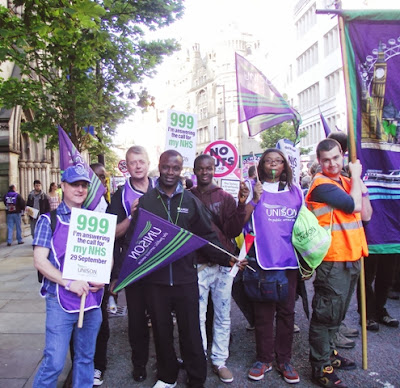 We are now on our way home in the London UNISON chartered train. Picture of current, past and future members of UNISON Housing Association branch with the regional banner.

Somebody on the march said that God must be a trade unionist, since it was so dry and sunny in Manchester today!

Police estimate that 50,000 people took part and that it is "one of the largest protests they have ever policed".

It was a largely good natured family event with many protesters bringing their children with them.

We went right around the Tory conference but didn't see much of the Tories. A few shadowy figures peering out of windows in the Midlands Hotel.

Andy Burnham, Labour's shadow health secretary, said: "David Cameron needs to be forcefully reminded that he has never been given the public's permission to put the NHS up for sale".

There was probably 50 times more people protesting outside the Tory conference centre than inside supporting them.  I suspect that on the future of the NHS that there is nationally a similar ratio of opposition against the Government.   Who have proved once again - that the NHS is not safe in their hands.
Posted by John Gray at Sunday, September 29, 2013

It never rains in Manchester!

agreed Alan. Never, ever and the Tories all love the NHS.