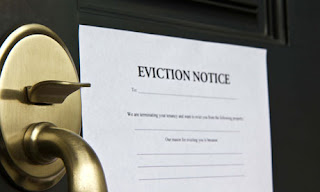 A good article in Guardian Housing network page.  Except Councils and Housing Associations shouldn't just wring their hands about the obvious and foreseeable increased risks to their staff .

They should be actively consulting with staff and trade unions on revised risk assessments and violence at work procedures.

Health and Safety enforcement agencies (the HSE for Councils and Councils for Housing Associations) should also be making sure that staff safety is being taken seriously.

Housing managers do not realise that they face imprisonment and unlimited fines for serious breaches of health and safely laws (and that they could even lose their homes since the employer and insurance providers cannot pay such fines).

"Housing providers have become de facto enforcers of many benefit cuts and are finding themselves at greater at risk of harm.

The recent shooting of a housing association employee and bailiff during an eviction should be of real concern to housing providers, and a reminder that our frontline workers often have to deal with the consequences of policies created in Westminster.

Reform of our welfare system was long overdue, but the pursuit of savage cuts is having a profound impact. Housing associations are well-placed to understand and explain the real effects of welfare reform in action. This is an important part of our role; acting as advocates for our customers, many of whom are not able to speak out for themselves, is one of the ways in which we can influence policy and support social justice.

Benefit cuts are putting many people in severe debt and, as that debt is often owed to their landlord, an increase in evictions is inevitable.

Housing providers are not the authors of these policies, nor their advocates, but have become the de facto enforcers of the new regime, and it's our colleagues who are having to bear the consequences of people's anger.

'Why are you doing this to me?'

At Curo housing association, our money management adviser has had several meetings recently with tenants in tears who, faced with benefit cuts and caps, don't know how they will pay their rent or clear their existing rent arrears. A question often asked is: "Why are you doing this to me?"
The adviser told me: "In my experience, the tenant will pay the creditor who shouts the loudest, leaving shortfalls elsewhere to cover the rest of essential household expenditure."

As housing associations do not chase debts as aggressively as payday lenders, banks or mobile phone companies, rent arrears can build up as tenants fail to prioritise rent payment when faced with threatening notices from others.

We will do all we can for customers who turn to us for help, but we also have to deal with the realities of running a business and have a responsibility to safeguard the financial viability of our organisations, for the sake of all our customers and for those who will need affordable homes in the future. Evictions are an inevitable consequence of the welfare reforms, and it is our staff who come face to face with the backlash.

We're dealing with rising numbers of people wishing to move, increased arrears and greater demand for debt advice. On an individual level, where the real story is, we're seeing greater levels of anxiety and stress as people, many of them vulnerable, try to cope with serious hardship.

We are concerned for those who are really struggling to make ends meet, but also concerned for our own frontline staff who put themselves at risk of harm through their association with policies they had no part in forming.