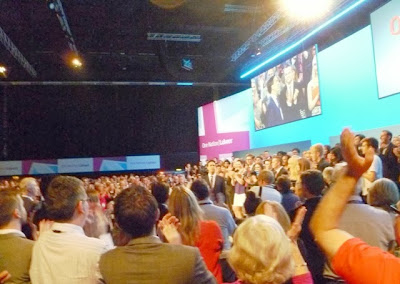 A quick post on my first impressions of Ed Miliband MP speech to conference.

I thought this speech was very good and well delivered. I think it was over one hour long with numerous interruptions from genuine standing ovations. How on earth can he memorise it all? I can't even remember a 3 minutes speech!

It projected him as a potential Prime Minster and national leader “who will not only stand up for the weak but also stand up to powerful”.

He is making a obvious play towards the self employed and those on low wages by stressing how disillusioned many people are who work hard but still find it impossible to make ends meet. "They used to say 'a rising tide lifts all boats'. Now the rising tide just seems to lift yachts." Not much detail.

He rightly hammered home that you can only trust Labour with the NHS and that the Party will have to rescue it again from the Tories mishandling when we return to power.

He made an excellent point about the Tories received £25 million from Hedge funds and surprise, surprise Hedge funds receive a £145 million tax break.  He might have said "trade unions are the cleanest money in British politics" - but he didn't.

Not really sure why he kept using the term "we are Britain" rather than we are "British"?

A welcome commitment to build 200k new homes a year and "use the land or lose the land" threat to builders and speculators who are sitting on large land banks. Not sure how he will do this? Nationalisation? Compulsory purchase? Tax?

Beforehand we were wondering what new policies he would announce during the speech. We agreed that they would be headline grabbing but not cost very much to a future government. The votes for 16 and 17 year olds and the welcome freeze on energy prices met those tests.


The Scottish Nationalists will not like the example he used of a Liverpool hospital caring for a patient from Glasgow as a reason why we are "better together" but I think it is a fair point and I’m glad that we are finally making the case for devolution and the United Kingdom.

Overall, I thought he is looking more like a credible Prime Minister than Cameron and now the election is getting nearer he can come out with policies that will make the difference between Labour and the Conservative clearer and give people positive reasons to vote for us.
Posted by John Gray at Tuesday, September 24, 2013

When the boot is being put into you, it always make you feel better knowing it’s coming from a Labour party and the Unions agree with it. I hope Labour win the next election. Roll on 2015.

Damian Mcbride shows Gordon Brown was too busy thinking about how to get into Number 10, rather then running the economy, which explains them mess we are in.

"Genuine standing ovations"? I hardly think so. Not the impression I got at all. He was preaching to the converted who were applauding ideas they thought it was their cue to applaud. To paraphrase a great historian, Donkeys led by Donkeys.

Not read his book anon 09.34 but Gordon Brown saved the economy from total collapse. Remember this recession was caused by the greed and selfishness of the very rich.

Well Bob, it was genuine spontaneous applause by delegates who were enthused by what they heard.

To paraphrase a great writer “An anonymous commentator is a man who knows the price of everything, and the value of nothing.”

Nothing anonymous about my comments - I gave my name and email address. Other friends at Conference tell me that they thought that conference is as stage managed as it was in the days of Blair and that much of the applause was anything but spontaneous. An old friend, who is in his late sixties and has been in the Labour Party since he was a boy, emailed me to say that "the Party now appears as two groups – the traditional trade unionists middle age or older, and the constituency delegates all young and wearing grey suits." Like most politicians he uses generalisation to make an impact but I would trust his view over a non-socialist late convert like yourself.

No surname and no email address? so I'm afraid you are indeed anonymous! Perhaps you don't even realise who you are yourself? What is wrong with you Tory loving internet trolls? The modern day Love That Dares to Speak its Name?

Surprised you have any "mates" at conference since you think they are "donkeys"?

Not really sure how you stage manage standing ovations of 1000 people?

Surely trade unionists have always been middle aged or older? I thought it was great there were so many young people as CLP delegates? Hardly any had grey suits (check union delegations for grey suits).

Finally, I don't think on the whole that my views have changed that much since I first joined the Labour Party aged 16.

With over 30 years in the Labour Party I am no Tory and I can never understand why you resort to such accusations when people don't agree with you.

And as for your views not changing since you joined the Labour Party when you were 16, didn't they change for all those years you were an active mamber of the Liberal Democrats?

I assumed, it would seem incorrectly, that you can identify people who have commented beforse and correspoonded with you from their IP address.

Large standing ovations have been arranged and manipulated for many years - the Tories are pastmasters at it, so I guess we can just disagree over whether it happens at Labour Conference.

I have many friends, most are Labour Party members, and we don't agree on everything. We do not however, disagree on the need to oust the Coalition and return to sensible well run Labour Government. I think that is most likely if we are polite, honest and don't flip flop on our core principles. The changes in Labour in the last 20 years have been breathtaking and do not always sit easily with older members and it is encouraging that Ed Miliband is sugesting a return to some pre Blair principles.

Time will tell, and if he can deliver I will be the one leading the standing ovation.

Call me naive but if some anon calls a labour party conference of 1000 "donkeys led by donkeys" (including now it appears your mates) I tend to assume they are Tories?

Glad to hear this is wrong.

Just a bit rich of you to call for politeness?

I have always been an active member of the Labour movement and my politics are broadly the same. While the means to that end has changed.

Nothing wrong with genuinely changing your mind about which Party to support.

In fact that is the whole point of politics discourse in a Parliamentary democracy. To get people to change their minds and support your party.

But I am quite clear. What is happening to this Country under the Tories is a complete disgrace causing havoc in the lives of working people and you are either for the Tories or against. You either work for a Labour victory or you are working for a Tory victory.

You may call me a liar over standing ovations but that is up to you. I was there and you were not. Perhaps your donkey mates were right and I was fooled.

You now seem to have changed your tone and think what happened at the Ed and the conference was positive? Talk about flip flop?

Make your mind up Bob.

My donkey comment was probably uncalled for, but having been to many conferences I know the way in which group euphoria promotes reaction without thought. Whilst I wasn't there I was watching the debates on the Parliament channel, and have had conversations and email exchanges with others who were there. I never called you a liar and there are just different views of what you saw as spontaniety. Sometimes, rather than just go on the offensive, it pays to listen to other points of view.

Has for changing my view, I'm not sure I have. I am genuinely unsure about Ed Milibands leadership and direction, and the viability of some of the policies being suggested. I hope that he develops into a good leader and a succesful prime minister and as I have done since I was a teenager, I will work for a Labour Party victory.

You say there is nothing wrong with changing your mind about which Party to support but you would be the first to attack someone who joined the Tories (and rightly so). I also feel that way about the Lib Dems and their performance in coalition has proved that they are not to be trusted.

I know your conversion back to Labour was a genuine one but it is wrong of you to give the impression you have een a member since you were 16 and aibrush out your membership and campaign activity for the Lib Dems. You will no doubt see it differently. I have another close friend who used to be very active in the Lib Dems and he tells me how he and many of his Lib Dem friends are becoming increasingly disillusioned with the way in which Clegg et al have been acting. Hopefully he and others, like you, will see the light and join Labour.

A rather mealy mouthed apology I'm afraid for calling us all "donkeys" and I cannot see how you could possibly not be calling me a liar since you "trust" over views rather than my own (which is your right of course).

I have never denied or "airbrushed" my past membership of the Lib Dems? It is a matter of fact that I "first" joined the Party aged 16 in 1978 (I was in the YS before that) and was an activist for many years - but lapsed during the recriminations and infighting after the 1987 General election result. I voted Labour in 1992 but joined the Lib Dems in 1994 in the main because I thought Labour would never defeat the Tories.

I wouldn't actually attack anyone for joining the Tories, I would attack their arguments, their support of policies and their actions.

I am pleased that you are going to be working for a Labour government. There is no alternative to the Tories but Labour.

I hope you and others will be going up to Manchester tomorrow to support Andy Burnham and the unions at their "Support the NHS" demo/rally outside the Tory conference!