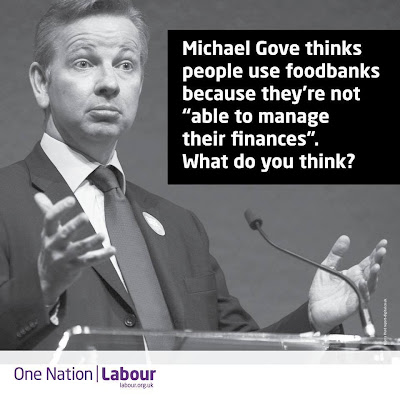 aka the ultra Tory Boy

When Gove speaks I think of Byrne and Murphy and a few others who have made statements very much like this. all parties have them.

don't be so ridiculous treborc

Whilst Michael Gove should not tar everyone who uses food banks with the same brush he does have a point that some people need to get their priorities right and maybe we need less do-gooders in the party and more people in the vein of Philip Davies-MP for Shipley, David TC Davies MP for Monmouth and Nadine Dorries MP for Mid Bedfordshire albeit a slightly more lefty version of them!

Surely the whole point Damien of a civilised social security safety net is to protect the weak and vulnerable?

Not for them to rely on Charities for basic food.

The words "like a hole in the head" comes to mind when thinking do we need a lefty version of Nadine Dorries in the Party.

Well we do need more people in the vein of Nadine who tell it like it is rather than Debbie Abrahams, Kate Green or Alison McGovern who are more like jumped up do-gooders than ordinary down to earth no nonsense people!

I think that in public life we actually need more people to engage their brain before they put mouth in gear.

Are there any food banks in Newham?