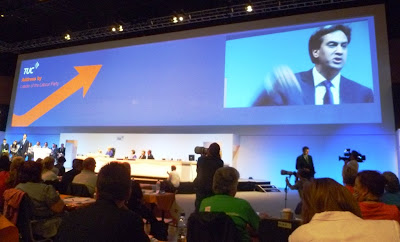 Ed started by comparing David Cameron - who considers unions a "threat to our economy" to a previous one nation Tory Prime Minister, the Earl of Derby, who first gave trade unions legal rights in 1867.

He called Cameron's attitude "nasty, small minded and divisive" and reminded Cameron what happened to Mitt Romney and his remarks about why 47% of voters will not support him.

He then championed his proposals for all trade union affiliates make an active choice to be part of the link with Labour. He then attacked the Tory economic policies and the prospect of a one sided unfair recovery. One which benefits the rich only. Followed by a raft of proposed Labour policies which are "union friendly". Such as action on zero hour contracts, living wage, public sector procurement apprenticeships, taxing bankers bonuses, British and regional investment banks, affordable child care, dignity at work, build more homes, regulate private sector landlords and letting agents, clampdown on payday loans with a cap on interest rates.

Finally a Q&A with firstly young delegates on the stage then with other delegates from the floor. He left to a respectable applause but no standing ovation (nor no jeers).

So what do I think of it?

When you consider the recent blood on the carpet between the unions and the Party he was in my view remarkably self confident and upbeat. I wondered why? The Tory press however will be disappointed that there was no heckling or booing.

While I still think that the proposals to change the way unions affiliate their members to the Party are unnecessary and potentially damaging, I thought it was clever of him to point out that unions have been complaining about their lack of influence over the Party for many years.  Increasing the number of union members joining the Party could change this.  This will depend on how much power you think ordinary members have over the Party.

He fudged a question on privatisation of public services (Railways) by saying he doesn't believe in "private sector good, public bad".

There was no mention of the NHS which surprised me a bit? I would have thought that it this would have  been a tub thumping issue that he could have "make hay" with.

I suspect that the personal attacks on Cameron and comparisons with him were there to remind delegates that it is less than 2 years before the next General election and that whether they all like him or not (and most are supportive) - it will be a straight choice between him or Cameron - on who will be the next Prime Minister.

So who will they prefer?

There is of course no choice and I think he knows this.

A (nother) reminder of how good EdM is (and why most of the Labour-affiliated Unions nominated him).

Lots of good stuff that can be done, almost none of it needing more public spending or borrowing.

For the sake of our people we have to get rid of this Tory government.

Nothing else matters as much.