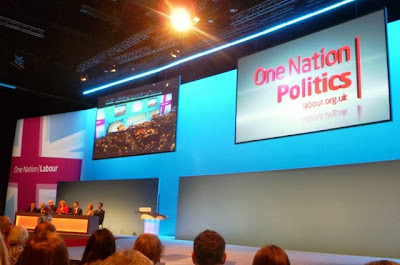 I'm inside the Brighton Centre for the Labour Party Conference which started today at 11am. This year I am part of the UNISON delegation as the representive of Greater London Regional Labour Link. Last night there was various Labour and Union regional receptions.  I saw Labour Leader, Ed Miliband give 4 slightly different versions of the same speech.

The conference day started for me at 8.30 this morning with a 90 minute delegation meeting going through issues and conference business.

I'll try and post on as many conference speeches and fringes as possible. Firstly, some personal thoughts on the role of the affiliated trade unions in the Labour Party.  This has of course been very much in the news lately. While there is the theory, "no publicity is bad publicity". I doubt this applies to the recent rows which I am sure have contributed to the recent decline in support for Labour nationally.  Voters don't like in fighting and what they perceive to be divided political parties.

I would rather we were talking about issues and problems that actually matter to people in the run up to the General election such as pay and jobs.  No one has ever mentioned to me on the doorstep that they won't support Labour because of the influence of the trade unions - and they have at times told me in great detail about a wide number of other reasons!

While there is still (just) time to carry out a consultation on the union link before the General Election it has to be real and meaningful.

As I have to keep reminding employers, consultation is not about rubber stamping a proposal. Consultation should be a 2 way street with nothing decided until the consultation is complete. Ed when campaigning for the Party leadership promised us that it would be "different" from recent leaders if he  was elected. He would listen to the Party.

I hold him to these views. Now, I don't expect the leader of what must be an effective political machine dedicated to battle and defeat the most successful electioneering party in Western Europe (tories) not to have a view on how to shape this machine.  I do expect Ed to listen and take into account what we say. Even Party members who are not that well disposed to the unions are asking what is the point of putting at risk affiliation when we will need every penny we can get to try and over come the vast tory war chest.

I heard this morning that there is less than 600 days to defeat David Cameron. Everything we do between now and the next General Election must be judged by one simple test. Does it make it more or less likely to defeat the Tories?
Posted by John Gray at Sunday, September 22, 2013