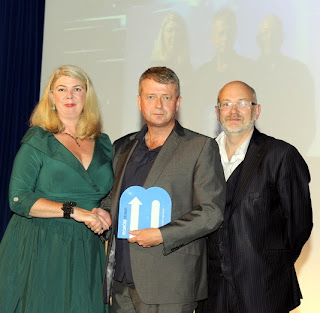 I am looking very serious but last night's event at the Mallowstreet 2013 Awards (Pension social media site) was actually fun. The event took place at The Globe Theatre, South Bank in London.

There was a great turnout by members of the AMNT.

I was up for two awards - "Most Influential Trustee" and "Top Blogger" of the year.

This is the second year in a row that I was nominated as a trustee.

This year I was selected as "Most Influential Trustee" and this was the judge's comments :-


“With one of the most viewed blogs for 2013 on the Church of England's investment in Wonga, this individual never shies away from sharing provocative view points, personal experience and opinion. He has provided the foundation for some very interesting discussions, he has always done his research, whether you share his views or not there is something about his musings that make you want to have your say as well.”

"provocative view points"? Do they mean me?

Picture with Judge, Louise Inward and host Vincent Franklin (Rowan the trainer in "The Office")

Congratulations to all nominees and winners for all the awards. Especially to the quiet and unassuming Henry Tapper from First Actuarial, who won two awards.
Posted by John Gray at Friday, September 13, 2013