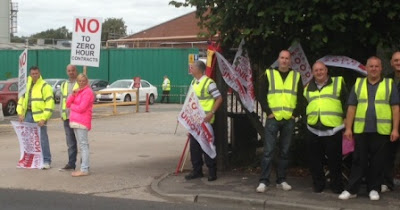 First item of business at Congress today (Wednesday) was to send a message of support to members of the Bakers union (BFAWU) out on strike at Hovis (Premier Foods) Wigan.

The BFAWU call for support at their picket lines and for a boycott of Hovis Products during the dispute. See union press release.

"The issue of zero-hour contracts is one that is taking up a considerable amount of column space in both local and national newspapers at the moment. The Bakers’, Food and Allied Workers Union highlighted this exploitation back in 2011 during a dispute with a well known supplier of cake products. Unfortunately, we remained a lone voice. With honourable exceptions, the media, local politicians and the general public alike decided to remain impassive and apathetic. Since then, the use of zero-hour contracts has reached almost epidemic proportions and it has been estimated that over a million UK workers are now employed on these contracts.

Sadly, it was only a matter of time before other organisations decided to jump on this particular bandwagon. Staff at the Hovis (Premier Foods) bakery in Wigan had already reduced their hours and subsequently, their pay in a bid to reduce the need for redundancies. However, after long and protracted discussions with the Union, the company decided to proceed with job losses. However, once the redundancies had been made, the company decided to renege on long standing recognition agreements and make up the ensuing staff shortfall with agency labour, with many being utilised on an ‘as and when’ basis, in other words; zero-hour contracts.

Since then, we have attempted to resolve this situation with the company, but to no avail. Ultimately, the Union took the painful decision to ballot its members at the Wigan site in order to seek a mandate for industrial action. The result was overwhelmingly in favour of strike action against the company on the following dates:

Further branch meetings will be held to extend the action unless the company comes to a satisfactory agreement with the Union on the withdrawal of agency labour from the site.

BFAWU members at Hovis, Wigan have not taken this decision lightly. They have no desire to lose pay. However, they see the current situation as unacceptable and are determined not to allow the company to set precedents, undermine current terms and conditions, create a two tier workforce and leave a poor legacy for subsequent generations of people who may be employed at Hovis in the future.

We urge the company to re-enter negotiations with the Union and find a way to resolve this dispute fairly, amicably and in a way that reflects the strength of feeling among the workforce".

UPDATE: I tweeted this post and got this response