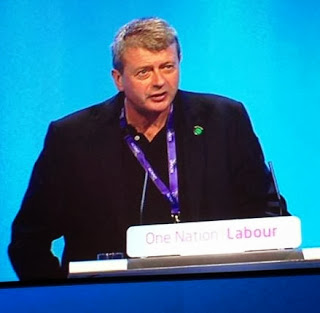 This is the speech I made on Monday afternoon

Conference, now for something a little different. For most of us the world of pensions and investments is baffling and obscure. We pay our money in – we hope it’s there when we need it in our retirement.

But the financial crisis showed that not knowing, and just hoping for the best, isn’t good enough.

We have to know more, and we have to be able to trust the people who are looking after our money to be sure that we have a secure future.

That’s a bit of a leap of faith for most of us! Which is why I’m so pleased that I’m part of an organisation that is doing the detailed work on my behalf.

It’s called a trade union – and everyone should be part of one!

My union, UNISON, has been looking closely at what happens to our pensions.  It's complicated stuff.  But put simply, the largest 10 pension funds in the world are the savings of Public Service workers. If the UK's local government pension scheme's assets were put together, it would rank as the 4th largest pension fund in the world, at around £150 billion.

But what control over it do we have? In the past, not a lot!

UNISON has been arguing that workers must be represented – and we’re winning the argument. Half the seats on the Local Government Pension Scheme fund boards in England and Wales are now reserved for scheme members. But they need support. So UNISON has been developing a comprehensive Capital Stewardship programme - the first of it’s kind for a trade union in the UK. To make sure that representatives can carry out their vital role properly.

And we’ve been doing detailed research. It shows that by structuring the funds properly, by getting efficiencies of scale and cutting the multiple fees charged, the returns for members can be massively improved, and crucial conflicts of interest removed.

For too long, our hard-earned funds have been managed in the interests of those who run the system – not the workers who created the value in the first place. That in turn leads to runaway executive pay; lack of diversity on executive boards; the squeeze on workers pay and pensions.

And of course, how ironic it is that our savings have been used to buy the treasury bonds used to bail out the banking sector. We should be the owners but our ownership was in the hands of the very organisations responsible for the economic crisis!

So we have a great opportunity – to use the wealth that is already in our hands to help reshape society.
To safeguard the hard-earned pensions of working people – but to do even more than that – to reshape the very way our economy operates.

Conference, the Tories always say there isn’t the money – what a whopper! The money’s there, it’s ours – let’s use it for our benefit – not theirs!"