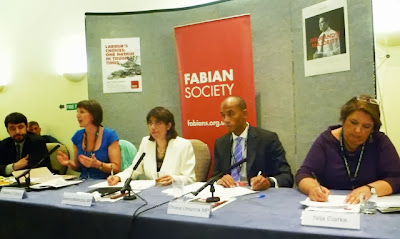 This interesting lunctime fringe had been sponsored by the Fabians, TUC and PIRC. Chaired by Seema Malhotra MP.

TUC General Secretary Frances O'Grady started off by saying some of her members think that "responsible capitalism" is an Oxymoron! But her main point was why is corporate governance in the UK so peculiar and out of step with the rest of Europe?  Where employee representation on company boards is common place.

We need to rebalance Labour and Capital. Frances quoted a terribly condescending and even insulting comment (which she described as "patronising twaddle") from the CBI about why in the UK British employees aren't good enough to being represented on boards.  Workers keep being told that they are the organisations "greatest assets". Yet the arguments being made against employee representation remind her of those made in 19th century against getting rid of the property qualification in order to vote.

Chuka Umunna MP believes that it is all about balance. Do we want a mixed or a laissez faire economy? Leading businesses started talking about this debate before we did in Parliament. Things have got to change. Need to promote the long term. Value investment in people and skill up. Look at the damage done to BP reputation and profitability after the oil disaster. It is in companies self interest to have good governance models.

Tom Powdrill from PIRC thought that the governance mascot was Lord Myners. Why did shareholders not stop the banks from destroying themselves? Excessive executive pay levels are being driven to the levels found in financial markets. Since oversight is not by shareholders but by fund managers and hedge funds who naturally will think such levels are appropriate. Need a dose of reality. Tackle the problem up stream before a decision is made.  UK Companies already invest in Europe where employee representatives are widely accepted -so why don't they support similar models over here?

Nita Clare from the IPA (see previous post here) was Tony Blair's advisor on trade unions and before that a national officer for unison for 17 years. Good businesses know the value of stakeholders. The CBI quote is now quite old fashioned.  She stressed the importance of the supply chain to business. If there is a fire in a Bangladeshi factory it is no use saying "nothing to do with us".

There has been a death of deference and trust at work. 60% of employees surveyed said they don't trust managers. Management style is critical. If you have a culture of fear in any organisation, private or public, then it will fail. The Social partnership approach in Germany will be difficult to adopt in UK


My question to the panel was similar to the one I made before was how is it that I am an employee representation on a £900 million pension scheme and I sit on a joint committee on health and safety that looks after the safety of thousands of workers but I cannot sit on the management board or remuneration committee of my organisation?
Posted by John Gray at Tuesday, September 24, 2013